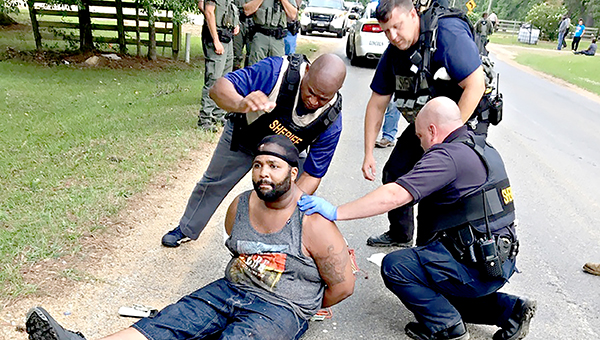 SHOOTING SUSPECT: Willie Cory Godbolt, 35, of Bogue Chitto is taken into custody after allegedly shooting eight people —including a Lincoln County Sheriff’s deputy, William Durr, overnight on Sunday. Godbolt admitted to the crime to reporters at the scene after being taken into custody shortly before 7 a.m. Sunday.

A Bogue Chitto man accused of fatally shooting a Lincoln County deputy and seven other people including two juveniles overnight Sunday will likely be charged with one count of capital murder and seven counts of first degree murder, said Mississippi Bureau of Investigation spokesman Warren Strain.

The deputy has been identified as 36-year-old William Durr.

Durr is the first Lincoln County officer killed in the line of duty, according to the Officer Down Memorial Page.

Authorities are calling it a shooting spree.

The suspect has been identified as 35-year-old Willie Cory Godbolt of 377 Brister Street in Bogue Chitto. He was taken into custody shortly before 7 a.m. near Super Jack’s at East Lincoln Road and U.S. 84.

The identities of the other victims are pending notification of next of kin. The investigation is ongoing.

Strain said Godbolt was taken to University of Mississippi Medical Center in Jackson for a gunshot wound to his arm. He was shot prior to his arrest, Strain said, possibly by one of the victims or someone at one of the three locations where Godbolt is accused of fatally shooting the eight people.

He does not know if Godbolt will be charged today.

“It depends on how long he stays in the hospital,” he said.

The shooting spree began at approximately 11:30 p.m. Saturday with a domestic call at 2871 Lee Drive in Bogue Chitto.

Four bodies, three females and the deputy, were recovered there, Strain said.

The second crime scene was located at 1658 Coopertown Road in Brookhaven. The bodies of two male juveniles were located there.

The third crime scene was located at 312 East Lincoln Road near Super Jack’s, and a male and a female were recovered at that location.

Strain said Godbolt could face additional charges such as auto burglary and kidnapping.

Godbolt will not be returned to Lincoln County jail immediately. He will be housed in an undisclosed facility once he is released from UMMC, Strain said.

He would not disclose what type of gun or guns Goldbolt used in the shooting.

He also could not speculate on a motive.

“It’s still too early on that. He hasn’t been interviewed since he was brought to the hospital,” he said.

Because there are three crime scenes to analyze and multiple people to interview, Strain expects the investigation to be slow going.

“It will take some time,” he said.

Residents on Coopertown Road were saddened and shocked at the deaths.

“We’re all neighbors and know each other,” said Cortez Gardener. “It’s sad. I talked to the person who was held hostage this morning and he’s just really shook up.”

Gardener said he didn’t hear gunfire, but heard the sirens on the street.

“I have no clue why he would come over here. I never heard any gunshots. I’ve been up since 3 a.m. and heard the cop cars, so the shootings could have happened earlier than that,” he said.

Vincent Mitchell told The Associated Press in an interview Sunday the slayings of eight people “all stemmed from domestic violence.”

He said Godbolt had been arguing with his estranged wife about their children when he opened fire inside his in-laws’ home after Durr arrived.

Mitchell said three family members were killed at his home.

Mitchell is Godbolt’s stepfather-in-law.  He said Godbolt came to his home Saturday to talk with his wife about taking their two children.

Mitchell said Godbolt appeared to be leaving after a sheriff’s deputy was called to the house. But “then he reached into his back pocket. He started shooting.”

Mitchell said his wife, Barbara Mitchell, was killed along with her daughter, Toccarra May, and the wife’s sister, Brenda May. The deputy was also slain. Mitchell says he and the suspect’s wife escaped.

Godbolt told The Clarion-Ledger that his intention was “suicide by cop.”

“I ain’t fit to live, not after what I done,” Godbolt told The Clarion-Ledger  after his arrest.

Godbolt said he was talking with his wife and members of her family when somebody called authorities.

“I was having a conversation with her stepdaddy and her mama and her, my wife, about me taking my children home,” Godbolt says on the video. “Somebody called the officer, people that didn’t even live at the house. That’s what they do. They intervene.

“They cost him his life,” the suspect said, apparently in reference to the slain deputy. “I’m sorry.”

Gov. Phil Bryant released the following statement: “I ask all Mississippians to join Deborah and me in praying for those lost in Lincoln County. Every day, the men and women who wear the badge make some measure of sacrifice to protect and serve their communities. Too often, we lose one of our finest. I thank the law enforcement agencies involved for their hard work. May the peace of the Almighty wash over those hurting after this senseless tragedy.”

“We mourn the loss of last night’s tragic deaths in Lincoln County. There are no words to convey the sadness and shock from such an event,” Attorney General Jim Hood said in a statement. “The death of the Lincoln County deputy who was responding to a call for help illustrates the danger law enforcement officers face every day.”

“He was a great guy,” Rushing said of Durr. “He had a heart of gold. He loved doing anything with kids. He would go out of his way to help anybody.”

Durr was being trained as a DARE officer and planned to teach the program in schools in the fall, Rushing said. The Drug Abuse Resistance Education program seeks to prevent use of controlled drugs, membership and gangs and violent behavior.

Rushing said his deputies are grieving the loss of one of their own. Counselors and area pastors are available to talk to law enforcement officers.

“The outpouring of other agencies has been awesome this morning,” he said.

He said the LCSO is there to support Durr’s family, wife Tressie and son, Nash, 11.

“I consider us all one big family. We’re here to help each other in a time of need,” he said.

Because the fatal shooting involved a Lincoln County deputy, the Mississippi Bureau of Investigation is handling the case, while LCSO will assist, he said.

He said he is sad for the families of the seven individuals who were also slain in the shooting spree.

“Our whole community is hurting right now,” he said. “It’s a hard time losing anybody, but especially this many. My heart goes out to the families of the other victims.”

Godbolt has a long criminal history, according to arrest records. In 2005 was charged with armed robbery and aggravated assault after he allegedly struck a man with a pistol and took his wallet, jewelry and cash outside a Bogue Chitto residence.

He was arrested for contempt of Justice Court and simple assault by the Lincoln County Sheriff’s Office in 2016.

Godbolt was arrested in 2015 for disorderly conduct/breach of peace and failure to comply with request by Lincoln County Sheriff’s Office.

He was arrested for driving with a suspended license, speeding and no proof of liability insurance by the Mississippi Highway Patrol in 2015.

In 2013, he was charged with simple assault by the Lincoln County Sheriff’s Office.

The shooting spree is the most violence the area has seen since 2015, when 10 were killed in Brookhaven and one in the county.

Brookhaven Mayor Joe Cox asked the community to be in prayer for the victims.

“I ask everyone in our community to join me in praying for the families of the eight individuals who tragically lost their lives last night as well as our sheriff and his officers,” he said. “The ultimate sacrifice was made by Lincoln County Sheriff’s Deputy William Durr, who once served on the Brookhaven Police Department, as he responded to the call for help.”

Cox thanked the law enforcement agencies who all joined in to “bring this senseless tragedy” to an end.

“Let us all come together as we mourn the lives lost and seek peace, comfort and healing that only our Heavenly Father can provide,” he said.

Two of the victims were students in the Brookhaven School District, school authorities said.

If found guilty Godbolt could face the death penalty or life without parole for the capital murder charge. First degree murder can carry a penalty of life in prison with the eligibility of parole.