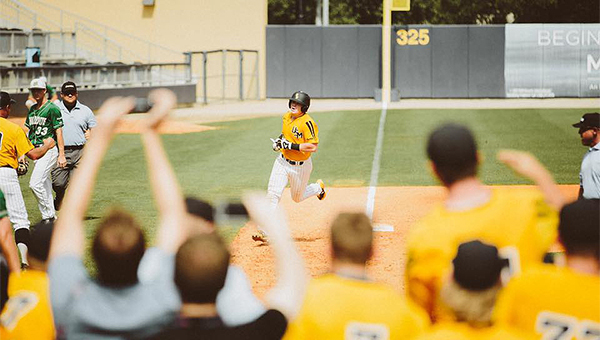 The road to Omaha will, in part, go through Hattiesburg and Baton Rogue as Southern Mississippi and LSU were announced as two of the 16 regional hosts for the 2017 NCAA baseball tournament.

LSU (43-17) will also have the chance to host a Super Regional, if they advance past regionals, after being named the No. 4 national seed. It is the sixth straight season LSU has earned a national seed, tying a record held by Stanford who accomplished the feat from 1999 to 2004.

“I’ve never placed much emphasis on the seeding,” LSU head coach Paul Mainieri said. “Maybe I should, I don’t know. I know that the number one overall seed has not won since 1999.

I’m just glad to be a national seed because it allows you to stay at home, and if you’re fortunate enough to win the regional, then you’re also at home for the super regional. Obviously, your chances of advancing are greater when you get to play in your ballpark with your fans rooting for you.”

LSU will open the regional Friday at 2:30 p.m. against Texas Southern.

“It seems like Rice and Southeastern are in our regional every year, it’s crazy,” LSU rightfielder Greg Deichmann said. “Those aren’t our opponents the first game. We have to deal with Texas Southern first. We’ll come up with our plan throughout the week and get after it on Friday.”

Rice defeated Southern Miss on Sunday to claim the C-USA title. The Owls will be participating in regionals for the 23rd consecutive year. Southeastern Louisiana earned an at-large bid after being eliminated in the Southland Conference tournament by New Orleans. Texas Southern earned an automatic bid with a victory over Alabama State in the SWAC Championship.

“We haven’t played Texas Southern in several years,” Mainieri said. “We played Southeastern earlier this year. And Rice, it seems like we can’t get away from them. Since I’ve been at LSU, we’ve played them in Omaha, in the Super Regionals and in Regionals.”

LSU enters the tournament on a hot streak after winning the SEC tournament on Sunday over Arkansas and are winners of 11 straight overall.

“I’m proud of the way the guys are playing,” Mainieri said. “We’ve figured out the guys to count on and in what roles. We’ve got a confident group. They’ve practiced hard. They genuinely care for each other, and I see a great unselfishness about them.”

The Baton Rogue regional is paired with the Hattiesburg regional and the winners of the two regionals will face off in the Super Regionals.

“We are extremely excited and very fortunate and blessed to be going to the postseason,” Mississippi State head coach Andy Cannizaro said. “Our guys have performed at an extremely high level all year. Today is a reward for their season so far. Now we kind of begin our second phase of the season and get into the postseason. It is such and awesome time of the year everybody and anyone is capable of beating anyone.”

Southern Mississippi is hosting a regional for the first time in 14 years. Last season, they traveled to Tallahassee for regionals as a No. 2 seed.

Mississippi State earned an at-large bid after being eliminated in the SEC tournament by Arkansas. UIC secured an automatic bid to the tournament by winning the Horizon League Championship. South Alabama won the Sun Belt Championship to secure a bid.

“Everybody is god this time of year and you take everybody as seriously as you possibly can and you try to focus on that day on that team and do everything you can to win one ball game at a time,” Cannizaro said.

Friday’s game will be the fourth of the season between the Bulldogs and South Alabama. Mississippi State won the first two games in March and the Jaguars came out ahead in the team’s third meeting in April.

They (South Alabama) have an outstanding team,” Cannizaro said. “They don’t beat themselves they are extremely talented. It will be a tremendous challenge for us Friday night.”

Southern Miss and Mississippi State played a midweek game in March, which the Golden Eagles won 7-5.

The SEC has the most teams in the field with eight, with Texas A&M, Auburn and Vanderbilt also in the field. The ACC and Big 12 each have seven.

Ole’ Miss (32-25) missed the field a year after serving as a regional host. Also missing the field were the Miami Hurricanes snapping their 44-year streak of making the postseason, the longest in the nation. Florida State now owns the longest active streak. The Seminoles have made the tournament for 40 straight years.