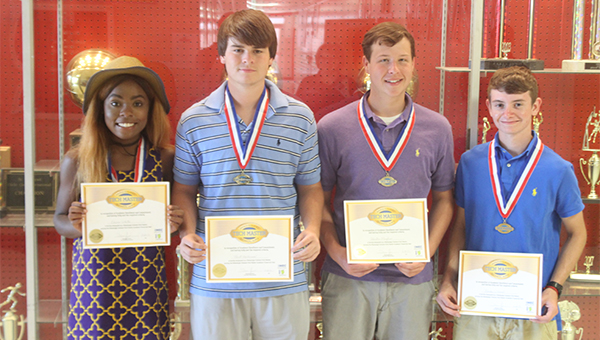 TECH MASTERS: Olivia White, Hunt Holdiness, Hunter Hughes and Blake Wilson were named Tech Masters for their academic achievements during their participation in the VWSD Career and Technical Center.

Four members of the Warren Central High School Class of 2017 have been recognized as Mississippi Scholars Tech Masters. They are the first Vicksburg Warren School District students to earn the distinction.

Hunt Holdiness, Hunter Hughes, Olivia White and Blake Wilson were named Tech Masters for their academic achievements during their participation in the VWSD Career and Technical Center.

“The program really helped me to learn about all the careers in the medical field and what they consist of,” White said. “When I started, I really didn’t know what I wanted to go into, but it helped me to see what it would be like if I went into various different careers.”

To be named Tech Masters, students must complete two years in the program, score at least an 18 on the ACT, have a GPA of 2.5 or higher, complete 40 hours of community service and have at least 95 percent school attendance throughout high school.

“It means a lot since we are the first ones to do it and shows you know what your field was and what you are doing,” White said.

Holdiness added “It was an honor to be nominated for the award, and that someone felt I was good enough to get it.”

The VWSD Career and Technical Center introduces students to career paths in disciplines that they are considering pursuing with the goal of helping them to make informed decisions about their future.

The courses helped Wilson to realize that he wants to pursue a degree in building and construction science instead of mechanical engineering at Mississippi State.