Bounce back year for Hinds baseball ends in World Series 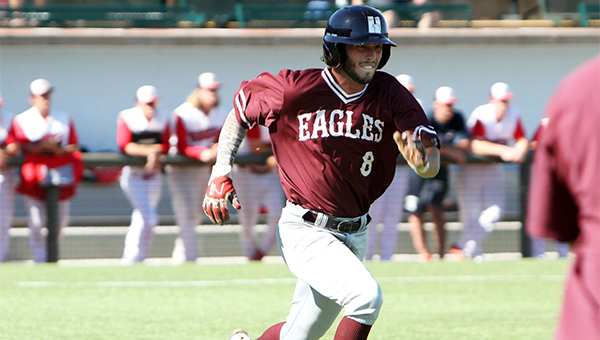 The Hinds Community College baseball team’s trip to the NJCAA College World Series may not have gone as planned as they went 0-2 in Oklahoma, but the season itself proved to be a bounce back year as they returned to the World Series for the first time since 2014.

A year after going 25-22, the Eagles (34-18) shook off a disappointing 2-4 start to the season by winning eight straight games. Later in the season, they fought their way through regionals to get back to Oklahoma for the World Series.

“That 2016 team, that was a year that we had lost 15 Division I signees, and it was really, I don’t know if you can ever really consider junior college rebuilding because you lose a lot of your team every year, but I don’t know that we had ever lost the pure magnitude of starters that we lost the year before,” Hinds head coach Sam Temple said.

The inexperience that plagued them in 2016 was a distant memory this season, and the Eagles entered the season with a mix of experienced sophomores and talented freshmen ready to contribute.

“This year, I felt like it was a great combination of experience that was returning from that year and some tremendous freshman,” Temple said. “Just a great nucleolus of young men. That was what gets you there.”

In the field and the batter’s box, they were led by sophomore Jackson Mitchell. He led the team with a .393 batting average, six homeruns and 18 doubles. He was named first team all-state for his performance throughout the season.

Freshman pitcher Caleb Morgan solidified his spot in the rotation earlier on and won eight games for the Eagles with a 2.70 ERA. He was also named to the all-state team.

“Caleb without a doubt with his year and numbers solidified himself as a guy that definitely fits that bill as a top pitcher in our program and that sets him up for a lot of success,” Temple said.

Mitchell, who signed with Oral Roberts, is one of 10 Eagles to sign with a Division I program so far.

“At my level, we’re truly trying to make these guys the best players and best men that we can while they’re at Hinds,” Temple said. “For most of these guys, their goal is to use Hinds as an opportunity to sign with major universities and four-year schools.”

The Eagles also received an important contribution from Vicksburg native Will Pierce once he got healthy late in the season. He finished with a .262 batting average in 27 games.

“He (Will) started just about every ball game for us down the stretch near the end the season as he really got himself back in form,” Temple said. “He came up with huge hits all through the regionals and World Series. We wouldn’t have been there surely without Will’s play.”

Hinds finished the regular season winning three of four games and then battled through a tough regional to earn their berth in the World Series.

They were matched up with Pitt Community College from North Carolina in the first round and fell 8-6 when a late game comeback fell short.

“I would have to say, the young man who threw for Pitt was one of the better pitchers I have seen in my time at Hinds,” Temple said. “He was very, very good. He was their number one. We did get to him in the seventh inning. Even in that first game, we were probably about four feet from a walk-off homerun.”

In the elimination game, Hinds faced Kankakee Community College from Illinois losing 8-7 to end their season.

“I left there thinking our guys had played just as hard and just as well as they did to get through the regional,” Temple said. “We just didn’t catch the breaks that it takes and every mistake at that level hurts you. We really did play well and played hard.”

The future is bright for Hinds with a strong sophomore class retuning including Pierce and Morgan and an influx of talent from this year’s recruiting class set to arrive in the fall.

“We have some really key components coming back for next year’s team and I’m really excited about the freshman group we signed,” Temple said. “It will be our job to put it together again.”