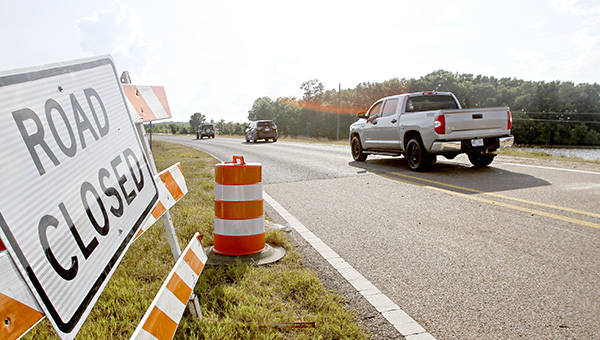 Travelers drive past the road closed sign that once blocked Highway 465 after it was opened Friday around 5 p.m. Highway 465 was recently closed due to flood waters covering parts of the roadway forcing travelers to the Eagle Lake area to travel by the levee. (Courtland Wells/The Vicksburg Post)

Mississippi 465 has reopened, and Mississippi Department of Transportation officials are urging drivers using the road to exercise caution.

The decision to reopen the main road into Eagle Lake came as the Mississippi River at Vicksburg fell to a level of 46.54 feet Friday morning.

“We will have barrels out marking the areas where there is water on the road,” he said. “There is water along the sides of the road, and the shoulders are very soft, so people will have to pay attention to their driving and stay on the road. That road is tough enough to drive under regular conditions. Right now, if you don’t pay attention, you’ll go into the water.”

Magee said conditions will improve as the water recedes.

The Mississippi is predicted to be at 46.2 feet Sunday and 45.9 feet by Monday.

MDOT officials closed Mississippi 465 May 14 as the Mississippi River rose toward its predicted crest of 48 feet. The river later crested at 49 feet May 26.

The Board of Directors of the Vicksburg-Warren County Chamber of Commerce has announced its support for the proposed Vicksburg Sports... read more