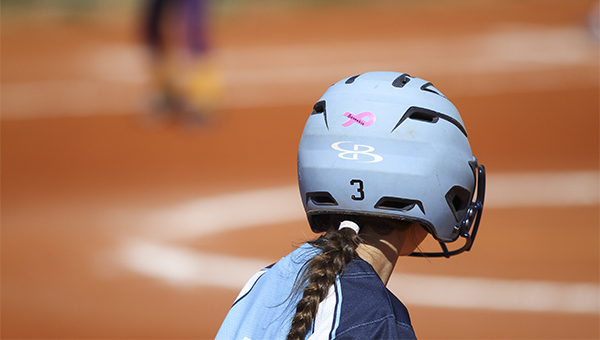 At first glance it looks like a simple pink sticker on the back of a light blue batting helmet.

Then you get closer and look harder and see there is nothing simple about this sticker.

The familiar shape of a cancer ribbon reveals its importance and the name written in black ink announces that it is personal to these players.

For each game this season, the Mississippi Blaze softball team has worn this sticker of a pink cancer ribbon with the name “Squeekie” to honor a teammate’s mother who died in December.

Ettie “Squeekie” Waters, whose daughter Madison is a player on the Blaze, died Dec. 19 from breast cancer. The ribbon bears her nickname and serves as a constant reminder to the team, they are more than just a team they are a family.

“We just formed this team in the fall,” Blaze coach Nathan Karel said. “Some of the girls already knew each other. [Madison’s] mom was sick when we formed the team and ended up passing away. We are kind of like a family now, and we wanted to show her that we are here for her and she’s not alone.”

Madison and her father Glenn both said the first time they saw the ribbons it made them “happy and sad at the same time,” but that it continues to remind them of Squeekie’s presence in their lives.

“It lets her know her mom is still there with us, that people still care for my daughter,” Glenn said. “That people still love me daughter, that other people love and care about Madison and that they loved and cared about her mama as well.”

The ribbon may not look like much, but for a team and a young girl who just lost her mother, its impact is immeasurable.

“It is kind of hard to explain,” Madison said of how the team has come closer with the ribbon on their helmets. “When you make a play, they say good job. We used to not do that, but nowadays we do. If we make a mistake, they say’ it’s ok’ and they comfort us and support us even though we mess up.”

The softball field and a team that has become a family has also become a solace in the most difficult of times.

Squeekie was not able to attend Madison’s game during the last year of her life, but now there is a constant reminder of her presence on the field at every game.

“It is pretty big to be able to be there for one of your players and be there doing something Madison likes to do and all the other girls and her [Madison] mom was big into softball,” Karel sad. “She would have loved us. Giving her something like softball to fall back on, I think it eases her mind.”

There have been ups and downs, wins and losses during the Blaze’s first season, but throughout it all they are playing for something more than just the total on the scoreboard.

“A couple of the girls are real sensitive to Madison, what happened and what she went through and is still going through,” Glenn said. “Those kids, it goes through their mind that it could be their mama that is gone. It makes them appreciate their mother more or it should.”

“You are playing for more. It is more than just a game,” Karel said,  “You really don’t understand how much time you spend together and how much more it is than just going out there and playing softball.”

With four days remaining before the June 6 municipal elections, candidates for mayor and North and South Ward alderman are... read more