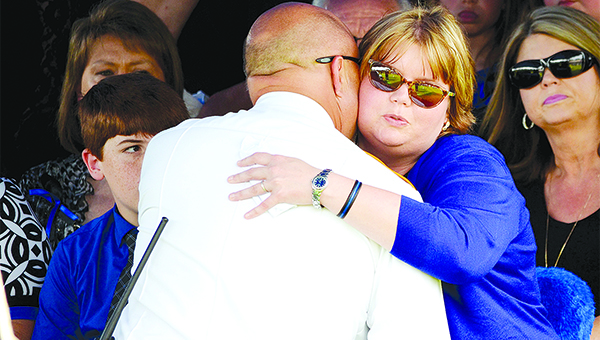 He read from Matthew 5:9, “Blessed are the peacemakers, for they will be called the children of God.”

Most of those who spoke at Durr’s funeral Thursday at Easthaven Baptist Church repeated the same thoughts. He was a child of God who loved his family and the people of Lincoln County, especially the children. He loved being a peacemaker just as much.

More than 1,100 people attended the services for Durr, a 36-year-old deputy who was killed in the line of duty Saturday night. The church broadcast the funeral on Facebook Live as well and the video drew more than 43,000 views within hours of the service.

Many in the sanctuary and in the lobby, where the overflow crowd sat and stood to watch the service on a pair of monitors, were law enforcement officers from city, county, state and federal departments from Mississippi, Louisiana, Alabama and beyond.

“As you can see, everybody loved William, regardless of if they knew him,” he said.

He recounted some humorous stories about Durr, like the time he pulled over a little girl in a kiddie car. Or when he sent a picture of some girls in the back of a squad car to their mamas.

He loved to smile, loved life and loved his job, where he tried to make a difference.

“He was dedicated,” Rushing said. “He loved his work, he loved his family and he loved his God. You knew that just from standing there talking to him. He didn’t have to tell you.”

He said Durr witnessed to anyone he encountered.

“He would go to calls,” he said. “And by the time the end of the call he would go to was over he was praying for them right there, with them unashamed, or he was trying to help them on the domestic call, help them with their problems.”

Gov. Phil Bryant, a former sheriff’s deputy himself, also talked about Durr’s work in law enforcement. “Nash, your father is a hero,” he said. “He went into harm’s way. Let us today pray for those families of the victims that were lost. We are here today for William but we are here for all of those who have gone on to their heavenly father.”

Seven others were killed during the weekend shooting spree. They are Barbara Mitchell, Brenda May, Toccara May, Jordan Blackwell, Austin Edwards, Sheila Burage and Ferrel Burage. All of the victims except for Durr were related.

Bryant said Durr lived a life of service and commitment.

Bryant said Durr was a peacemaker who put himself in front to protect the others from danger, to light the way through the darkness so that others may follow.

“William Durr will pass that torch on to another,” he said. “There will be another man or woman in uniform, perhaps they’ll be fortunate enough to work for Steve Rushing, but they will take up William’s torch. They will defend, they will pursue, they will light the way.

“A torch without a flame is useless. William Durr’s torch will burn brightly. He beared it with courage and honesty and commitment.”

The procession passed hundreds of people at various spots along Hwy. 51 as it made its way to the small country road that led to Moak’s Creek Baptist Church cemetery.

Volunteer fire departments parked along the road at several intersections and the firefighters lined the street, hands over their hearts.

Families gathered by mailboxes to show their respect as the procession passed by. Some people saluted. Many held flags. Most held their hearts.

Young children held handwritten signs proclaiming, “We love you, Mrs. Tressie.” Signs vowed that No. 22 would never be forgotten.

As the procession passed along Fox Road, Pricedale Drive and finally to Moak’s Creek Road, people stood and showed they cared.

As it neared the church grounds, the procession passed honeysuckle bushes, sweet gum trees and gardenias on the gravel and blacktop road.

Durr preached at that church several times. The Rev. Mike Alexander called Durr his “No. 1 supply guy” who would take over the pulpit whenever Alexander was away.

It’s not far from Lee Road, where Durr was shot and killed while trying to protect and serve others.

While the funeral at Easthaven lasted about an hour, the graveside service was short. The pallbearers carried Durr’s body to his final resting spot and the family made its way in to sit. On the front row were Adam Cook and his fiance’, William Durr’s sister Megan, Durr’s mother Debbie Durr, his son Nash Durr and his wife Tressie Durr.

The Mississippi Highway Patrol Honor Guard removed the flag from Durr’s casket and methodically folded it into a triangle, which Cpl. Brandon Fortenberry passed to the sheriff who presented it to Durr’s widow.

An MHP bugler played taps, which was followed by seven troopers firing blank cartridges from their rifles into the air three times.

Within minutes, four planes flew over the cemetery in a Missing Man formation, with one breaking away to fly in another direction to represent the fallen deputy.

Then the silence was broken as a Lincoln County dispatcher came over the air with the radio code that means an officer has gone off duty. The dispatcher gave the final call to say No. 22 was “now and forever 10-7.”