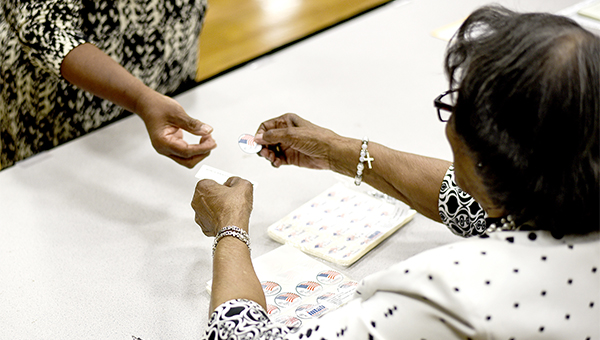 Mary Miller hands a voter a 'I Voted!' sticker after voting in the first municipal election Tuesday at the Vicksburg City Auditorium (Courtland Wells/Vicksburg Post)

With four days remaining before the June 6 municipal elections, candidates for mayor and North and South Ward alderman are mapping out their final campaign strategies and getting ready to hit the street in a final push to the voters before election day.

All three incumbent members of the Board of Mayor and Aldermen face challengers.

Mayor George Flaggs Jr.’s bid for a second term is contested by two independent candidates, Darryl Hollingsworth, who ran against Flaggs in the 2013 general election, and Willie Robinson. Flaggs defeated challengers Charles Selmon and Mitchell Dent in the May Democratic primary.

Flaggs said his final push includes campaigning door-to-door, holding events during the end of the week, and going to church.

“I’m going to three churches Sunday,” he said. “I’m doing what I’ve always done; it’s a tradition with me to end with multiple get out the vote rallies with a mixture of people and then I go to church. I always end up at the same church.”

“We’re going to be out knocking doors, getting fliers out and spreading the message,” Hollingsworth said.

“That’s our whole strategy; we’re up and personal with the people. We’ve got a long ways to go and I’m talking one-on-one to people on both sides to find out what the issues are. I’m still going to be working on election night.”

In the North Ward, former Vicksburg police officer Troy Kimble, running as an independent, is challenging Alderman Mike Mayfield’s attempt for a fourth term on the board. Mayfield defeated John Carroll in the May Democratic primary.

Mayfield said he will continue his practice of walking and meeting the people in the North Ward. “I’m still working hard,” he said. “That’s the only way I know how.”

Kimble said he plans one weekend event as well as going door-to-door, and will get messages out on social media. “We’re just trying to get the final word out there to the people that ‘hey, it’s time,’” he said.

South Ward Alderman Willis Thompson, who was unopposed in the Democratic primary, is seeking his second term in office. He is challenged by Dist. 54 Rep. Alex Monsour, the only Republican running in the race.

Monsour will be backing up his door-to-door campaigning with newspaper advertisements, roto-calls and mail-outs, which he said are expected to reach from 2,400 to 3,000 people.

“It’s just taking every advantage to get to the people and explain the issues and remind them to get out and vote,” he said.

Thompson said he plans to continue doing his job.

“I’m working, responding to calls and finishing up projects we’re working on and being as responsive as I’ve always been and that takes a lot of time. As far as the campaign’s going, I’m making contact with voters, walking the streets, knocking on doors, sending correspondence, going to meetings; everything that’s necessary for me to make contact with voters and explain my contributions as their alderman.

“I’m not going to stop doing my job until July 1, and that’s win or lose.” 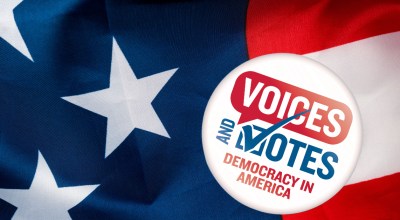