Last Mass before retirement for Father Curley is June 25 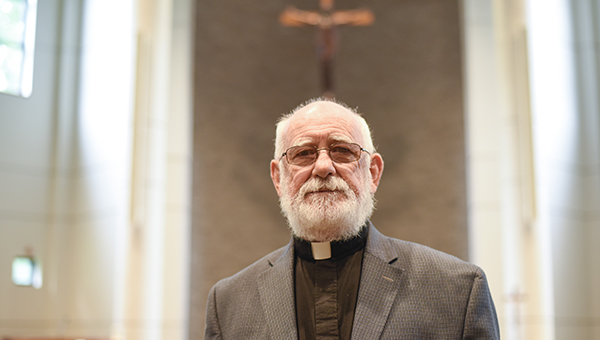 RETIRING: The Rev. P.J. Curley will say his last Mass as pastor at St. Michael Catholic Church in Vicksburg on June 25 before beginning his retirement.

The Rev. P.J. Curley sat back in his office and recited one of his favorite poems, “The Lake Isle of Innisfree,” by English poet William Butler Yeats:

“I will arise and go now, and go to Innisfree,
And a small cabin build there, of clay and wattles made:

“Nine bean-rows will I have there, a hive for the honeybee,

“And live alone in the bee-loud glade.

“And I shall have some peace there, for peace comes dropping slow,

“Dropping from the veils of the morning to where the cricket sings;

“There midnight’s all a glimmer, and noon a purple glow,

“And evening full of the linnet’s wings.
I will arise and go now, for always night and day

“I hear lake water lapping with low sounds by the shore;

“While I stand on the roadway, or on the pavements grey,

“I hear it in the deep heart’s core.”

“When I learned that poem, I remember some of the old people; they were old and not doing anything, and were retired, and I’d think, ‘That will never happen to me,’ and now all of a sudden, here I am.”

Tuesday, Father Curley celebrates his 47th year as a priest. June 25, he will say his last Mass at St. Michael Catholic Church and retire. July 1, the Rev. Robert Dore will take over as St. Michael’s pastor.

It was in 1970 that a young Father Curley came to Mississippi, taking his first assignment at Biloxi.

“The Irish always had a missionary spirit,” he said of his journey to the southern U.S. “We’ve sent priests and sisters all over the world. I chose Mississippi.”

Biloxi was the start of a ministerial journey that would take him to Jackson, Woodville, Shelby, Belzoni, Yazoo City and then Vicksburg.

“Time goes by so quickly and I’ve been so blessed. I’ve lived longer now in Vicksburg than I’ve lived in any other place in Mississippi.”

But Vicksburg was a long way off for the young priest who came to a strange place and had to adjust to a different culture, cuisine and weather, especially the heat, which he told relatives in a letter was similar to standing in front of an open oven.

“I remember especially my mom being so lonely. And I was equally lonely, but I didn’t want anybody to know it.

“When I came here, I was anxious and nervous and excited, but I think my cockiness overcame that. My family instilled a great sense of self-confidence in me, but I remember thinking I know I can solve everybody’s problems.

“I was 26 years of age, and when you’re 26 years of age, you have an ego, and when I was 26, and a new priest, I just knew the whole world revolved around me,” Curley said. “I knew everything and I knew I knew everything. And now, 50 years later, I realize I’m just a spoke in the wheel, and it’s such a great wheel. And now I realize I know nothing, and I know I know nothing, and I don’t mind admitting it.”

But he was concerned if people would have a hard time understanding him as he prepared to say his first Mass.

He needn’t have worried. “I remember how welcoming everybody was and how friendly they were. By then I hadn’t know that our state was called ‘the hospitality state.’ Now I see why.”

“I remember people telling me, ‘You’ve got big shoes to fill,’ and I remember showing people the size of my shoes and the size of my foot, and I said, ‘I don’t have to worry about that, my shoes are so small. And interestingly, the priest I replaced in Biloxi was Father Tom Lalor, so here I had people telling me I had big shoes to fill and I knew Father Lalor, because we were in the seminary together — he was just 2 or 3 years ahead of me.”

He said a bishop brought him to Vicksburg, explaining that in the Diocese of Jackson, once a priest was ordained, he was assigned by the bishop usually to a three- or four-year assignment to get to know a parish to get experience in ministry.

“I was in the diocese seven years when I became the pastor of St. Joseph Church in Woodville, and then the diocese had a policy that you be a pastor in a parish for six years, and that assignment could be renewed for another six. Then after 12 years, you had to move. My assignment at Yazoo city ended and I was sent to Vicksburg.

Curley credits the late Bishop Joseph Bunini with influencing his ministry in Mississippi.

Bishop Brunini, he said, proclaimed the idea of justice and peace and equality for everybody, regardless of color, faith or political views.

“That didn’t make any difference to Bishop Brunini. You were one of god’s children and that’s all it took. I’ve done that in a lot of my preaching, and the way I put it is that God has created every single one of us in his image and in his likeness.

“I’m sure it got me into hot water once in a while, because not everybody sees it the way I see. But that’s the just world, and it has to be spoken out loud and it has to be said out loud, often. Even probably more so today than ever. Loud and clear. I don’t think my goal was to say the nice thing or the appropriate thing. I’ve always tried to say the scripture in my preaching and apply it to the world as it is today.”

Curley said he will be living in Vicksburg “until something else happens.”

“I’ll be available to help anywhere I’m needed; I will probably spend more time in the school,” he said. “I will miss nothing, that’s probably because I’ll still be here.

“People ask me, ‘What are you going to do?’ I tell them ‘Looking forward to enjoying myself. If I wanted to do something, I’d stay being pastor.’”

And there may be time to play golf, a sport he learned after he came to Mississippi.

But the question, he said, is not what he plans to do, “But what have I learned.”

“(And) I’ve learned how generous people have been to me in my priesthood.”