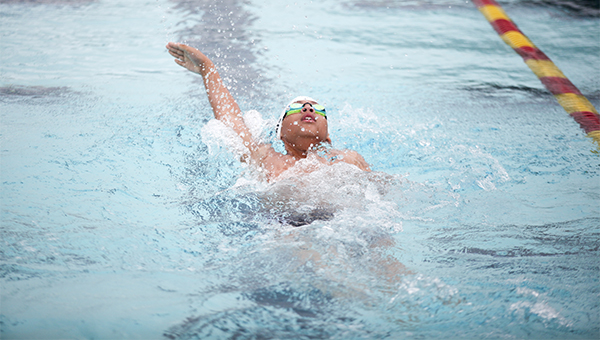 The rain that threatened to be an issue Friday and Saturday held off, and more than 200 swimmers were able to take their turn in the pool during the first two days of the annual Stamm Invitational hosted by the Vicksburg Swim Association at City Pool.

The annual meet started Friday morning with a short course session for swimmer s under the age of 12.

In the short course session, 16 VSA individuals and relays won their races.

“They love that short course session, and once we do that first podium break where they get to get up, get medals and get their picture taken, they kind of feel celebrity status and get motivated to race hard,” VSA coach Mathew Mixon said. “They race fast and it looks like we have a lot of potential in the future with the swimmers we have in those age groups.”

Friday and Saturday, the pool was changed over for a long course meet. After two days of competition, VSA held a sizable lead for first place over Cosst – Northwest Louisiana Swim with 849 points to Cosst’s 429. Nine teams took part in the meet.

“It’s been great,” Mixon said. “Weather has held out for us, which has been good. It’s actually been pretty cool for a Stamm meet. The team is swimming really well. We’ve had a lot of first place finishes and have a good strong lead going into day three out of the nine teams that are in this meet.”

In all 25 VSA swimmers won first place in their events in the first two days of long course competition.

“She had to race really hard at the end,” Mixon said. “It was a lot closer race than the second and a half. It came down to those last couple yards. She raced hard and was racing to win and then she got out we were like ‘that was a good time, lets see if that was close to a state cut’ and it was.”

Mixon said it is a big deal when a swimmer qualifies for state because, “usually once they get one, they get the fire going and they continue to go forward from there.”

The state meet has served as motivation for the VSA swimmers, because the shorter long course season gives them fewer opportunities to punch their ticket to state.

“They’ve got state meet coming up at the end of July and a lot of our kids are really gunning to make those state cuts,” Mixon said. “The energy of putting yourself out there in the lead or the potential to win a medal or high point award adds fuel to the fire for some of those kids, I feel like a lot of them are really motivate today to try to win, try to go fast.”

The swimmers returned to the pool for the final day of competition Sunday at 9 a.m.