Flagg, Jones are the city’s first line of contact for many 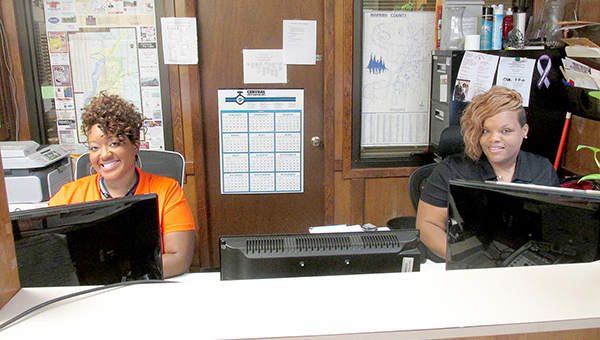 Tucked in a small room off the stairs on the first floor of City Hall, two women — Katrina Flagg and Ola Jones — are ready and willing five days a week to field questions, complaints or requests for service.

They work for the City of Vicksburg’s Action Line, 601-636-3411, fielding questions about utility bills, potholes, overgrown lots, snake problems or any other situations a resident might encounter.

“We get all types of calls,” Flagg said. “When they (callers) say action, they want action.”

“We can help people for everything,” Jones said, “even helping people with phone numbers.

“We have people calling to find phone numbers for Jackson, not just the city of Vicksburg, but all over,” Flagg said.

That “anything” includes requests for information about Cedar Hill Cemetery, like the call Flagg received Friday from a woman in California, who wanted information about someone buried at the city’s cemetery. The call was transferred to the city clerk’s office, which is responsible for the cemetery records.

Of the two women, Flagg has the longest tenure, having been with the Action Line since 2009. Jones has been with the city for 10 months.

“I saw a job opening for the Action Line and I asked for the job description,” said Flagg, who was working at a convenience store at the time. “They began to tell me the job description, and I said, ‘I can handle that. It’s similar to other jobs I’ve had. I went in and applied, and here I am today.”

Jones was working as a temporary employee in the mayor’s office, filling for his administrative assistant.

“I inquired about other opportunities and found out about this position, so I applied.”

She said the job “is interesting; there’s never a dull moment.”

“You want to try and help everybody,” she said. “Sometimes you just have to listen. Sometimes we get an elderly person on the phone, and they just want to talk, and you just listen to what they want; you hear them out. You talk to them and they’ll be fine after that. They don’t want anything, just an ear to listen.”

And there are those calls when a resident needs help.

When someone calls with a problem, a work order is filled out and forwarded to the proper city department, which responds to the problem. The ladies on the Action Line can check online to see if the work has been done. Sometimes, they hear about it from the person who called in the complaint.

Sometimes, Flagg said, they will receive a call thanking them for their help; at other times, “They call back and say ‘this was never taken care of,’ and it seems like the weight was on your shoulders and you didn’t get the job done.”

Whatever the call, she said, she tries to remain calm, adding handling the Action Line is more than just solving problems and addressing complaints. She needs to keep a calm relationship with the caller.

“I’ve had my share of hairy and hostile situations, but I know I cannot let a heated customer force me to lose my cool,” she said.

One of those times when a calm demeanor was necessary came during the city’s three-day water crisis that began May 17.

“We would get calls all the time wanting to know where the water was coming back on, or why their water was out; would they be getting a discount on their water bill,” Flagg said.

“People asked where can they get water, was the city going to be donating water out today,” Jones said, adding, “We worked 19 hours of overtime; we answered calls from 7 (a.m.) to 9 (p.m.). We even delivered some water.

“During the water crisis we had people call up and say they appreciated the city and how they handled everything,” she said.

Despite those tough periods, Flagg said she enjoys working the Action Line.

“I like helping others, I like it when I can get somone connected to the right person to meet their needs. It makes you feel good to help.”

“ We’re able to assist people,” Jones said. “I like it when we can help someone and they’re satisfied. We leave a good impression on the community. You know you’ve had a hard week when you answer your personal phone with ‘Vicksburg Action Line, can I help you?’”

Last Mass before retirement for Father Curley is June…