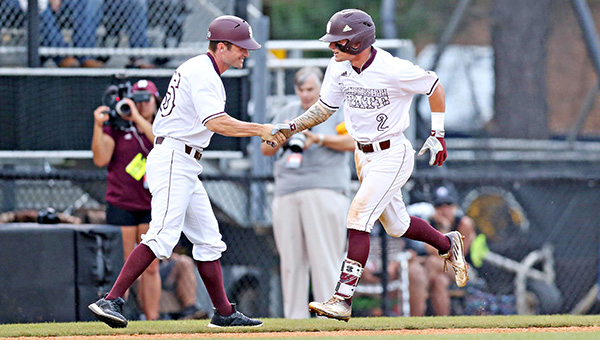 Mississippi State’s Hunter Stovall (2) is congratulated by third base coach Mike Brown as he rounds third after hitting a home run Sunday against South Alabama. Mississippi State won, 7-3, and will play Southern Miss in the championship round of the Hattiesburg Regional on Monday. (Kelly Price/Mississippi State Athletics)

HATTIESBURG (AP) — Mississippi State and Southern Miss will open the 2018 season with a three-game series at Pete Taylor Park.

The win — as well as a 5-4 victory over Illinois-Chicago in another elimination game Sunday — sends the Bulldogs into the championship round Monday against Southern Miss (50-14), which beat South Alabama 8-3 in a winners’ bracket game earlier Sunday.

Mississippi State (38-25) and Southern Miss will play at 1 p.m. Monday, with MSU needing to beat the Golden Eagles twice to advance to the super regional round against LSU next weekend. If Mississippi State wins the first game, they’ll play again at 6 p.m.

Southern Miss won the only meeting between the teams this season, 7-5 in Pearl on March 21.

“We are really excited and looking forward to the challenge of playing a terrific Southern Miss team. They are an outstanding team and extremely aggressive at the plate and they throw strikes on the mound,” Mississippi State coach Andy Cannizaro said. “We are fired up to be playing them Monday, we feel like we are playing really well right now and I know these guys are jacked up for the challenge tomorrow.”

Mississippi State exploded for five runs in the third inning against South Alabama (40-21), all with two outs. Hunter Stovall’s two-run homer plated the Bulldogs’ first two runs. Brown then followed Brent Rooker’s walk and Ryan Gridley’s single with his blast over the wall in right-center.

Cole Gordon added a late homer for the Bulldogs.

Wells Davis hit two homers for South Alabama, which beat Mississippi State in the opening game of the regional on Friday but then had its season end with back-to-back losses in the span of a few hours Sunday.

In the first game Sunday against Illinois-Chicago (39-17), Konnor Pilkington (8-5) pitched into the eighth inning. He struck out nine and allowed four runs — three of them in the eighth inning — to earn the win and help save the bullpen some work.

Spencer Price and Riley Self finished up, with Self pitching the last 1 2/3 innings for his seventh save of the season.

Against South Alabama, starter Denver McQuary (3-3) pitched five innings, allowing two runs, for the victory. Reliever Peyton Plumlee allowed one run over the final four innings for his first save.

“Our two pitchers were outstanding. Denver got us halfway through the ballgame today. The fastball had a lot of life to it but he was able to keep the ball down in the zone, had some success there in the middle with getting his breaking ball over called for strikes early in the game,” Cannizaro said after the victory over South Alabama. “Peyton Plumlee came in the back half of the game and did a tremendous job of locating his fastball and throwing his curveball for called strikes then threw a few change-ups in there. A big time effort from two guys that we needed it from tonight. Both of those guys really stepped up and allowed us to win the ballgame.”

Taylor Braley pitched into the sixth inning and also hit a home run over the scoreboard, and Southern Miss beat South Alabama to advance to the championship round in the Hattiesburg Regional.

Braley and Tracy Hadley both homered during a four-run fifth inning, which gave the Golden Eagles (50-14) a 7-2 lead.

Southern Miss (50-14) won its first two games in a regional for the first time since 2009, and also reached the 50-win mark for the first time in school history. It needs to beat Mississippi State once today to advance to the super regional round against LSU.

“Really proud of our club and how we came out and competed today. I thought it started from the first inning on,” Southern Miss coach Scott Berry said. “It really started with Taylor Braley on the mound, how we was able to adjust. They took some good swings off of him there in the bottom half of the first, but from that point on he really adjusted his game, got his change-up going and, obviously, at the plate he had a big home run that he had that put us up 4-2. Later he had a big double to lead off the inning, so a lot of big moments in that game, but very proud of our guys.”

Braley (7-2) got the win. He allowed three runs, on eight hits and two walks, in 5 2/3 innings. After giving up two runs in the bottom of the first inning, he scattered four hits over the next four-plus innings. He left after giving up an RBI single to Dylan Hardy with two outs in the sixth inning.

Stevie Powers, Nick Sandlin and Hayden Roberts covered the last 3 1/3 innings. They combined to allow four hits and three walks, but no runs.

“They did a great job navigating through that lineup. South Alabama, they hit over .300 as a team and have six left-handers,” Berry said. “Stevie Powers, when he came in to inherit those lefties, I could tell he was worn down a little bit, but for him to get that change-up, I’d say that was the key with those lefties. He was able to speed them up and slow them down. Hayden Roberts and Nick Sandlin at the end, I felt they could hold it down and they pitched very well.”