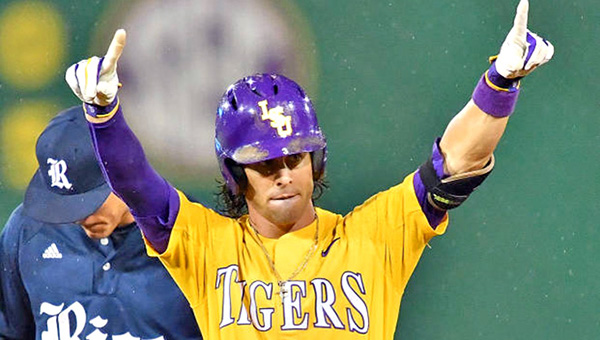 BATON ROUGE, La. (AP) — Like flowers blooming, mosquitoes biting, and the increasing heat and humidity in South Louisiana, LSU winning NCAA Tournament regionals is just something that happens every spring.

The Tigers (46-17) won their 14th consecutive game and will play in the super regional round for the 13th time since 1999. They’ll await the winner of the Hattiesburg Regional, where Mississippi State and Southern Miss will play for the title on Monday. LSU is seeking its 18th College World Series appearance since 1986.

“That’s our fourth championship this year and four of six possible championships,” LSU coach Paul Mainieri said. “When you start the NCAA Tournament, it takes five (games). We’re three-fifths of the way there, and I think you’re going to see a team come out next weekend that’s going to play nice and loose, aggressive and confident.”

Walker (8-1), a freshman, struck out eight, walked none and allowed seven hits.

Walker gave up his last two hits to open the ninth and was relieved by Zack Hess, who struck out the side.
LSU only had six hits, but took advantage of two errors by Rice to score three unearned runs in the second inning. Josh Smith had an RBI double and finished 2-for-3 with two runs scored. Kramer Robertson also doubled, scored one run and drove in another.

One dead, one jailed in Bovina stabbing