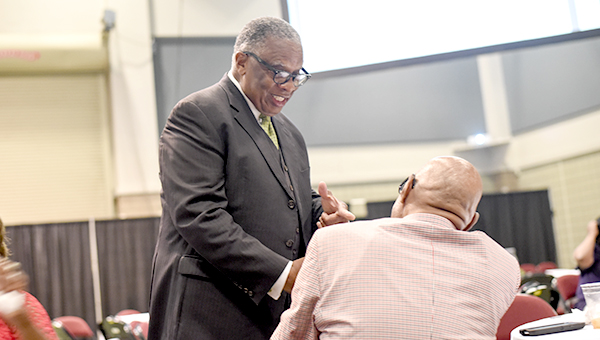 Mayor George Flaggs Jr. won each of the city’s 11 precincts on the way to winning a second, and he said final, term as Vicksburg mayor.

“I think it’s a sad day for Vicksburg and I wish Mayor Flaggs all the success,” Hollingsworth said.

“The people weren’t listening to what I had to say,” Robinson said. “They really don’t understand. They’re kind of in a conundrum of popularity and who’s got the most money; not what is best for Vicksburg.”

Flaggs said it felt good to win his second term.

“It always feels good when you can get the confidence of the people behind you, and my opponents only make me better,” Flaggs said. “I think we’ve passed the crossroads, and I think the people have spoken that they like the leadership I’ve provided, and I just hope the board will rally around me and share my vision, whoever they may be.”

Flaggs was first elected mayor in 2013, defeating Hollingsworth by 75 percent of the vote.

His first term included a push to amend the city’s 105-year-old charter, and to get and fund a sports complex for the city. The referendum for the 2 percent special sales tax to fund the sports complex passed by 63 percent of the vote.

He said his decision not to seek a third term is a personal one.

“I’ve got to be able to live. I’ve been in politics a long time. I’ve lost a lot in my personal life. I’ve got to be able to enjoy life away from politics. I love it, but I think I can do the things that need to be done, and to turn this city over to a younger person with a progressive vision for this city and move forward with it.

“I hope by saying that, the board will be more cooperative with me, because I’m not interested in running for re-election, I’m interested in making this city better than it is today. We can do better.”