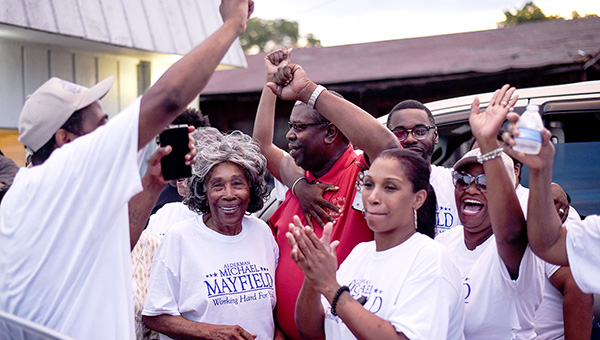 “This was my seventh time to run for election — the first three were for county supervisor — and this one was the hardest fought. I’m always concerned until the last vote is counted, but praise be to the almighty,” Mayfield said late Tuesday night at the tail end of his victory party, held at The Headquarters at the corner of Clay and First North streets.

“I want to thank my family as a whole, my friends and neighbors and the citizenry of the North Ward,” he said.

Mayfield said much has been accomplished in the last four years in the city’s North Ward, and many projects are set to begin soon.

“There are so many things that are on the table just waiting for a signature. Others are shovel ready,” he said. He noted a park, which includes a track, is in the works for the Kings community, as well as improvements to Fuzzy Johnson Park.

Mayfield said the city is closer than ever to taking down the old Kuhn Hospital and redeveloping that property into residential housing and a park.

“We have plans for 30 to 32 conventional houses all with their own driveways and a park that would enhance the entire area,” he said. “And we are continuing to address the issue of dilapidated housing. There are so many issues this new board will face.”

“I appreciate the fact that he ran a very strong campaign and a very positive campaign,” he said. “I think he has a future if he wants to go this route again, and I wish him well.”

Kimble was disappointed with the outcome of the election.

“My thoughts are what I said before. People are afraid to change. They get comfortable with a situation. You have to want to do better and want more. If you don’t, you are simply accepting what you have now,” Kimble said.

The former Vicksburg Police Department officer quit his job to run for the North Ward seat. He said he’s not sure what’s next for him.

“I don’t know what comes next. I put quite a bit into this election. Law enforcement is still my passion, so maybe something dealing with that. But right now I just don’t know,” Kimble said.

He said he had attempted to call Mayfield to congratulate him, but had yet to make contact with him.