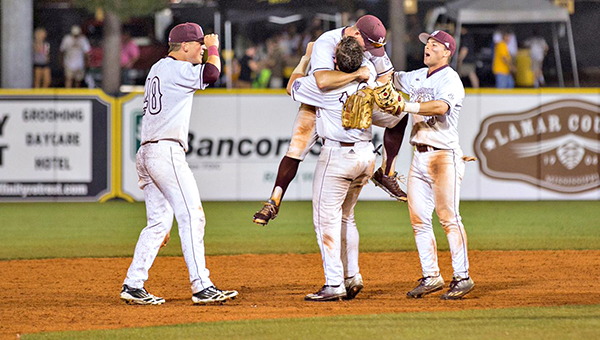 HATTIESBURG (AP) — Mississippi State’s pitching staff was running on fumes, its season hanging by a thread as it tried to pull off what was supposed to be an impossible comeback.

That’s when the Bulldogs stole some of the Pete Taylor Park magic that had served its opponent so well this season.

Brent Rooker and Cody Brown each had three RBIs, and Mississippi State beat host Southern Miss 8-6 early Tuesday in the championship game of the Hattiesburg Regional.

Mississippi State (40-25) won four games in two days — including two against Southern Miss on Monday night — to advance to the super regional round against No. 4 national seed LSU.

It’s the first time since 1979 that Mississippi State lost the opening game of an NCAA Tournament regional and came back through the losers’ bracket to win the title.

“This is unbelievable,” first-year Mississippi State coach Andy Cannizaro said. “This is what has epitomized our team the whole season. They fight. They play hard. They never give up. We talked about not wanting this to be the last weekend of Mississippi State baseball for our veteran guys. Making a super regional team with this team is incredible. We will be playing in Baton Rouge this weekend and we are jacked about it.”

As excited as Cannizaro was, the end of the season was a bitter pill to swallow for Southern Miss (50-16).

The Golden Eagles set a school record for victories and won their first three games in the regional — the first at Pete Taylor Park since 2003 — to reach the championship round. They only needed to beat their in-state rival once Monday to move on to the super regional.

Instead, they were blown out 8-1 in the first game against the Bulldogs and then let a four-run lead slip away in the second game.

Mississippi State scored four unanswered runs in the last three innings and did not score after the fifth inning in the 8-6 loss.

“The game is sometimes unforgiving and we are feeling it right now, but it gives us many things that we are grateful for,” Southern Miss coach Scott Berry said. “What I don’t want to lose in this whole thing, is yes, our season ended, but what a season it was for these young men that are sitting next to me and all their teammates.”

Mississippi State had to win four games in two days to claim its 13th regional championship and make it to back-to-back super regionals for the first time since 2000-01.

Its thin pitching staff got a huge lift from Jacob Billingsley, who threw a complete game in the first half of Monday’s doubleheader. The junior right-hander allowed one run, on six hits and four walks, and struck out five.

It was just the second complete game of the season for the Bulldogs, and the first of Billingsley’s career.
MSU’s hitters backed him with five runs in the third inning, three of them coming on a home run by Josh Lovelady. Rooker added a two-run homer in the sixth.

Rooker, the Southeastern Conference Player of the Year, kept the Bulldogs rolling with a home run in the first inning of the championship game. It was his 23rd of the season.

Southern Miss stole the momentum back, however, by scoring four times in the bottom of the first. Dylan Burdeaux led off with a home run, Daniel Keating hit a two-run double and Matthew Guidry an RBI single.

LeeMarcus Boyd homered in the fifth inning to put the Golden Eagles ahead 5-1, but things turned south soon after.

After Kirk McCarty gave up a single and walk to start the MSU fifth, Nick Sandlin was summoned from the bullpen. Sandlin got two outs, but then gave up a full-count home run to Brown, the regional’s Most

It was the first home run Sandlin had allowed all year, and only the second he has allowed in his first two seasons at Southern Miss.

Hunter Slater homered in the bottom of the fifth to push Southern Miss’ lead back to 6-4, but Mississippi State kept on coming.

Rooker walked and scored on a double play in the seventh, and then in the eighth blooped a two-out single that fell between three USM players near the right field foul line. Two runs scored on the hit to give the Bulldogs a 7-6 lead.

Elijah MacNamee added an RBI single in the ninth to make it 8-6.

Southern Miss had scored the winning run seven times in its final at-bat this season, but ran out of magic when it needed it most.

Slater was stranded at second base in the bottom of the eighth inning, and a two-out single by Boyd in the ninth went for naught. Burdeaux popped out to Rooker in foul territory to end Southern Miss’ hopes and season.

“Definitely not the way we wanted to go out,” said Slater, who went 5-for-8 in the two games with two runs scored and two RBIs. “It was pretty heart-wrenching. We had a great season and it’s something we will have for our lifetime.”

Mississippi State got a stellar outing from its bullpen after starter Cole Gordon gave up four runs and was knocked out of the game after only two-thirds of an inning.

Trey Jolly, Spencer Price and Riley Self combined to allowed two runs on six hits in 8 1/3 innings. They only walked one batter.

Price (4-1) got the win, while Self worked two scoreless innings at the end for his eighth save of the season.
Brown and Rooker had three hits apiece in Monday’s doubleheader, which started nearly five hours late because of rain and didn’t end until just before 1 a.m.

Cannizaro called it a fitting tribute to a season in which the Bulldogs have racked up nearly two dozen come-from-behind wins.

For years, the competitive success of the Vicksburg Swim Association’s Killer Whales team has been measured in individual events and... read more