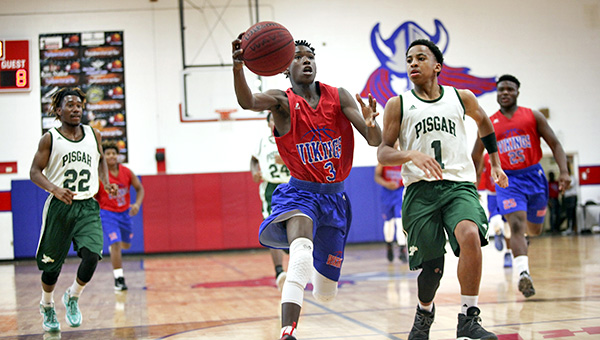 Vikings look for effort in summer

It will be months before the wins and losses begin to count, and, despite the dominant victory, WC coach Bruce Robinson said his team “has a lot of work to do” before that point.

“When we play Pisgah, that is exactly what we are supposed to do,” Robinson said. “We’ve got a lot of work to do. We’re not crisp. We haven’t had many practices. We’ve got a long road.”

The Vikings have a grueling summer schedule planned for June, which will see the team play up to 30 games during the month. They’ve already played six, and will play two more Tuesday at home against Vicksburg and Dyersburg (Tennessee).

Tuesday’s games are part of a six-game lineup that begins at 3 p.m. with Vicksburg vs. Warren Central’s varsity. The ninth-grade and junior varsity teams from those teams will also play each other, and then both varsity teams will take turns against Dyersburg.

“Being the summer, we had four freshmen that have been playing JV with us, but of course they played in the varsity game,” Robinson said. “We’ll go out and we’ll try to win, but winning in June is not as important as winning in February. That is what we’re working toward. We are going to play some kids. If we win them, that’s fine. If we don’t win them that’s also fine, because we keep everything in perspective and we are a big picture program.”

In the game against Pisgah, Warren Central was led by Cooper Paterson, who scored 14 points, including eight in the first half. The game was divided into four eight-minute quarters with a running clock. The Vikings took a 17-5 lead after the first quarter and stretched their advantage to 25-6 at halftime.

The dominant play continued in the second half, and the Vikings led 30-11 at the end of three before outscoring Pisgah 18-6 over the final eight minutes for the 48-17 win.

Robinson said that two of the goals for his team during the summer are to develop a post game and determine which players are going to put forth the necessary effort to be successful. Following the win, Robinson applauded his players for their effort, but said there’s room for improvement.

“We are getting the effort,” he said. “Most times we come out, the effort is not going to be a problem, because they pretty much understand that. Do we need more effort? Yes. The intensity on defense is lacking. It doesn’t matter about the offensive end, because the offense will come, but we’ve got to do a better job defensively.”

The team also moved in the right direction of accomplishing its second goal as senior Jabari Bowman took advantage of the emphasis on post play and was second on the team with 11 points.

“They were feeding me and they put me in a position to make a lot of shots,” Bowman said.

Flagg, Jones are the city’s first line of contact for many

Tucked in a small room off the stairs on the first floor of City Hall, two women — Katrina Flagg... read more