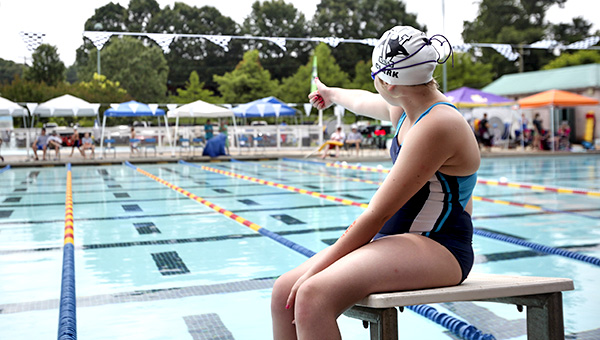 Katelyn Clark give a thumbs up before competing in the 9-10-year-olds’ 50-meter backstroke during the Stamm Family Invitational Swim Meet at City Pool. Clark won that event and three others to help the Vicksburg Swim Association’s Killer Whales win their home meet for the first time. (Courtland Wells/The Vicksburg Post)

For years, the competitive success of the Vicksburg Swim Association’s Killer Whales team has been measured in individual events and state championships won, not necessarily where the team as a whole finished at the end of the meet.

Sunday, then, marked the start of a new season and a new era.

Led by a strong showing among their youngest swimmers, the Killer Whales won 40 out of 116 events and finished first overall at the annual Stamm Family Invitational at City Pool. The VSA squad totaled 1,547 points — more than double the 770 of runner-up Bulldog Aquatics Club — and won its home meet for the first time ever.

“It’s the first time I can remember winning. In fact, it’s the first meet we’ve won first place since I’ve been here. We’ve gotten in the top three a few times, but we’ve never won. That was nice,” said Mathew Mixon, who has been the VSA’s coach since 2010. “We had good swims. Everybody was swimming at the top of their age groups. It was one of those weekends where everything clicked.”

The Killer Whales were helped a bit by some low turnout from other teams. Sunkist, a large Madison-based team that has long dominated the Stamm Invitational, was away competing at another meet in Memphis. Most of the other eight clubs brought smaller rosters that gave the VSA a huge numbers advantage, which is a requirement to contend for a championship at a large meet.

Even with those caveats, Mixon said the meet victory was a milestone for the program.

“It’s great for our program to get a win. There were still nine teams to be represented there and we were on top of the podium. For us to get a win was a big deal for me and for our team,” Mixon said.

The Killer Whales’ victory was rooted in a mix of youth and depth. Tulio Figueroa and Kara Rowe combined for 13 victories in the 8-and-under age division, while in the 9-10-year-olds’ division Katelyn Clark won four events and Tony Fields won three.

“That’s exciting, because those guys are your future,” Mixon said.

In all, 13 swimmers won at least one event and four relay teams also took gold.

“Usually you might have one swimmer that wins a ton of events, but this time it’s spread throughout the team and a lot of others were runner-up,” Mixon said. “When they get a little taste of victory it’s contagious. That’s what we like about our meet, is it’s a chance to experience that and to do it in front of their parents and grandparents and family.”

The next meet for the Killer Whales is June 30, at the GPAC Invite in Pensacola, Florida. A week after that they’ll host the VSA Last Chance meet at City Pool on July 8, which is designed to give swimmers a shot at achieving qualifying times for the Mississippi Swimming, Inc. State Meet July 20-23 in Tupelo.

“It’s the last meet of the summer before the state meet,” Mixon said. “For some of them it’s their last swim, and if they’re trying to make a qualifying time they can. That’s the goal for us, is to get as many kids as we can to the state meet.”

Vikings look for effort in summer