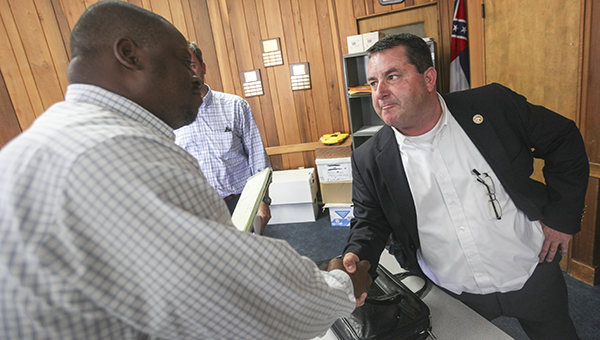 After all the ballots were counted, including absentee and another 12 affidavit ballots, Monsour earned 942 votes, while Thompson received 934.

“It was very anxious,” Monsour said of waiting for the result. “I did this to do what’s right for the city and work fast and furious and put everything I’ve got into it to help the city get to the next level. I didn’t want to miss that opportunity.”

Monsour held a 935 to 928 advantage after votes cast via machine on Election Day and absentee ballots were counted Tuesday evening. The Vicksburg election commission reconvened Wednesday morning to verify and count the 19 affidavit ballots that remained uncounted.

“That is why the elections are set up and we do all that we do in the state legislature on election laws to make sure it comes with a final good outcome and everybody knows it,” Monsour said.

The election commission approved 14 of the affidavit ballots and rejected five because the voters were not registered in the city. The commission also accepted one curbside vote.

The curbside vote was cast in favor of Thompson, while Monsour won the affidavit vote 7 to 5. Two of the accepted affidavits had no vote cast in the South Ward alderman race.

“It brings some closure to it,” Thompson said. “We left everything in limbo and it ended in a tight race. Those were the results, the people have spoken and I’m good with it.

“I see it as a tight race. I think it was a good competitive race. Every vote counts.”

Thompson, who said he has no plans at this time to contest the results, will end his term as South Ward Alderman on July 5. It was his only term on the board.

“The last four years have been four years of accomplishments,” Thompson said. “We got a lot done in the ward. Streets are being paved. We’re building a new fire station. Lee Street Pavilion has been renovated. We just passed a referendum for the sports complex, which I spent more time on than anybody, but somebody else will get the credit for it.”

Monsour, the current State Representative for District 54, has served in the state legislature for 10 year and he said he plans to use the contacts he has made in Jackson to make improvements in Vicksburg.

“I want to use what I have, the contacts in Jackson, Mississippi, I want use my knowledge of everything that is available to the city from the state level,” Monsour said. “We are going to be looking at having to do something with the water in the upcoming year, and it is easier when you have the ease of walking into an office where you’ve been.”

Monsour said it also helps that he knows the processes for getting things accomplished in the legislature and which agencies to go to for different issues.

“We don’t have to sit here and call somebody,” Monsour sad. “It will be very good for me to just walk over to that building, go up there and see who I need to see and get done what we need to get done.”

He said that his plans for the next four years include working on infrastructure, bringing jobs to Vicksburg and improving public safety.

“We have a lot of assets in Vicksburg, but we need to create jobs that they can raise a family on,” Monsour said. “We need to bring tourism here as much as we can. We also need to get public safety under control. I’m out there talking to everybody, and it is going to be one of my key issues making sure these neighborhoods are safe.”

Monsour’s current term in the state legislature ends in 2019, and he said “that is probably so. I would imagine,” when asked if he planned to resign his seat.

“This is a full time job,” Monsour said of serving as South Ward Alderman. “I imagine I will have to [resign]. I haven’t even checked on what we do to resign. I was just going through this process, because I didn’t have to give up my seat in order to get this one. Now the process goes to the next level and finding out what I’ve got to do and resigning.”

He said he plans to find out the process for resigning “in the next few days” after taking a day to rest following the election.