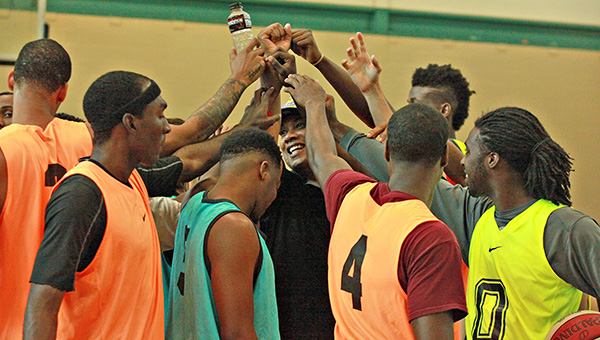 Players come together for a high five before beginning a session at the River City Summer League in 2016. The workout and developmental camp for former college basketball players will begin its fourth summer in Vicksburg Friday at 6:30 p.m. at the Jackson Street Gym. (File/The Vicksburg Post)

A couple dozen former college basketball players will flock to Vicksburg this summer to keep their games sharp and their options open.

The River City Summer League, a combination workout and developmental camp hosted by the American Basketball Association’s Jackson Showboats, will tip off its fourth year in Vicksburg Friday night at the Jackson Street Community Center.

The camp will feature more than 25 former college and junior college players who won’t be picked in the NBA draft later this month, but are still hoping to latch on with a minor league or overseas team.

Although most of them will never play for an NBA team, the players coming to the River City League bring with them some impressive resumés. The camp is invitation-only, and college basketball experience is a requirement.

That weeds out most players, but still leaves plenty of latitude to provide a wide range of talent. In previous years, players with professional experience like former Vicksburg High star Mychal Ammons have shared the court with those trying to follow him up the food chain after their eligibility at junior and four-year college programs was exhausted. Occasionally, current college players find their way into the 5-on-5 scrimmages.

Most of the same players will be back throughout the League’s two-month run, but Worsley said a number float in and out for a week or two at a time as their schedules allow. This year’s lineup includes players from colleges in Mississippi, Louisiana, Arkansas and Oklahoma.

“Sometimes I’ll get there and guys show up and have to sign a waiver right there,” Worsley said. “It’s not teams that are predetermined. As long as I can see them play and check them out and make sure they belong there, we’ll take a look.”

Worsley has added a sponsor for this year’s edition of the RCL with Waterview Casino, but said the camp isn’t a moneymaker. It’s more about gaining exposure for his players and perhaps finding a few diamonds in the rough who can play for the Showboats.

The Showboats play in the sprawling ABA, which is a loose confederation of nearly 100 teams spread across the country. Many games are played in tournaments in centralized locations. The Showboats also played several exhibition games last season in New Orleans’ Smoothie King Arena as a warm-up act before home games of the NBA’s New Orleans Pelicans.

“It’s about being consistent. The development is about the players. It’s not about trying to get sponsors or make X amount of dollars. It’s about creating an opportunity to play and be seen, and that’s what I’m proud about with the League,” Worsley said. “There’s opportunities for these guys out there, but they have to be ready for it. This is preparing them for it, and it’s also an opportunity to find players for the Showboats.”

The River City League will play each Friday at the Jackson Street Gym, from 6:30 to approximately 9 p.m., until July 28. The first session is this Friday night. The League typically features 5-on-5 scrimmages, but is primarily a workout camp and occasionally changes formats.

Spectators are welcome. Admission is free.

Participation in the league is by invitation only, but Worsley said anyone wanting a tryout can contact him at 769-203-2108 to arrange one. Players in the River City League must have played at a junior college, four-year school, or some other level of basketball beyond high school.

RIVER CITY LEAGUE:
• The River City League, a developmental and workout basketball camp, will begin play Friday at 6:30 p.m. at the Jackson Street Gym. The camp will hold a session every Friday night through July 28.
• Admission for spectators is free
• Participation in the camp is by invitation only, but tryouts can be arranged by calling Grant Worsley at 769-203-2108. All players must have some college basketball experience.