South Ward race is still too close to call 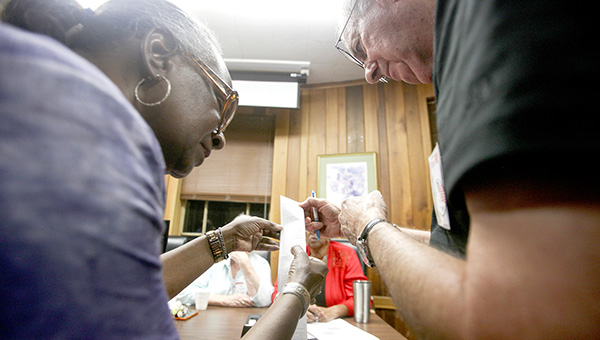 Voters in Vicksburg’s South Ward will have to wait a little longer to find out who will represent them on the Board of Mayor and Alderman.

As of Wednesday morning, challenger Alex Monsour held just a seven vote lead over incumbent Willis Thompson. But, there were 19 affidavit ballots that needed to be reviewed, challenged and counted before a winner could be declared.

That process began Wednesday at 8 a.m. As of 10 a.m., only five ballots had been reviewed, with only two accepted.

“Probably won’t be sleeping very much just thinking about it,” Monsour said as he left the Vicksburg City Hall Tuesday night. “We will get out there and be up here at 8 in the morning and go through the process and see what we’ve got.”

Thompson said he is “going to sleep fine. I’m at peace with it. It is over. I ran the best race we could run, the results are in and it will be God’s will. Win or lose I’m fine.”

Thompson took an early lead in the race and led 586 to 493 with the Vicksburg Armory, 5A Elks Lodge and Plumber/Pipefitters Union Lodge precincts reporting.

The race flipped in Monsour’s favor when the Porters Chapel United Methodist Church precinct was announced 268 to 62 in his favor giving him a 761 to 648 advantage with one precinct to go.

“It was from zero to 100,” Monsour said of when the results of that box were announced. “It was one of those things. This is how elections go. You just have to be on top of your game.  We did the best we could do. We went out there, we knocked doors, we mailed out, robo calls. Everything you can imagine.”

Thompson said, “I expected it. I didn’t expect it to that magnitude. I knew I wouldn’t win Porters Chapel, I was just trying to get as many as I could.”

Monsour’s sizeable lead was short lived though as Thompson cut it to only eight votes when the final precinct, Old No. 5 Fire Station, was announced 250 to 149 in Thompson’s favor.

“It is a learning experience,” Monsour said. “You just have to be humble, because everybody else told me ‘you’ve got it,’ but I said ‘no, that’s not the way you play it.’ You go to the last minute, you do everything you can and you hope it turns out your way.”

After all the precincts had been reported, Monsour actually held an eight vote lead. Then, election officials counted the 51 absentee ballots in that ward.

Thompson received 26 of those votes, while Monsour received 25.

“You take those months trying to show the public what you’ve done,” Thompson said of the election. “I think my accomplishments are vast. This board has had a great run, and regardless of accomplishments we find ourselves here.”