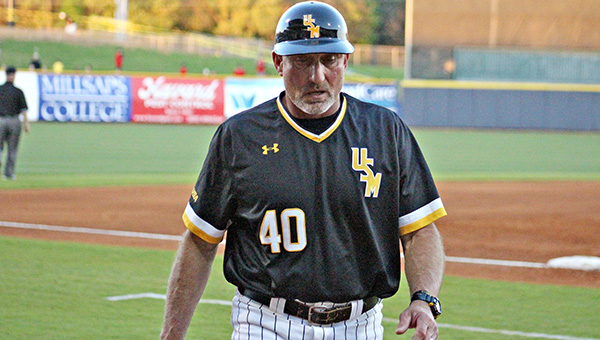 Southern Miss baseball coach Scott Berry walks back to the dugout between innings of a game against Mississippi State in March. (Ernest Bowker/The Vicksburg Post)

USM tries to focus on the positives

Southern Miss won 50 games this season, hosted an NCAA Tournament regional for the first time in 14 years, and was within one win of reaching the super regional round for just the second time in school history.

In one stunning, frustrating evening, it all went up in smoke.

The Golden Eagles lost 8-1 and 8-6 to in-state rival Mississippi State in the championship round of the Hattiesburg Regional on Monday, ending their season agonizingly short of a major benchmark of college baseball success.

The ending made all of the success leading up to it a footnote in the record books, but the Golden Eagles did their best in the immediate aftermath to appreciate the ride.

“What I don’t want to lose in this whole thing, is yes, our season ended today, but what a season it was for these young men that are sitting next to me and all their teammates,” Southern Miss coach Scott Berry said in the postgame press conference early Tuesday. “It’s a very special group that I’ll always be thankful for, and the Southern Miss fan base should too for all the excitement and good times they gave us. Not only did they represent us on the field, but off it as well and how we run our program.”

It’s hard to call this the best or most successful season in Southern Miss history — the 2009 team remains the only one to reach the College World Series — but it did achieve a number of high honors and distinctions.

The 50 wins were a school record, and senior first baseman Dylan Burdeaux was the Conference USA Player of the Year — the first USM player to win the award in C-USA’s 20-year history.

The Golden Eagles (50-16) did not lose more than two games in a row at any point in the season, and only lost back-to-back games four times. Unfortunately, one of those times was when they only needed to win once.

“I wouldn’t say any lasting words, this ride has been unbelievable … it’s definitely one I’m never gonna forget with these guys here and what this coaching staff did for me,” Burdeaux said. “These coaches gave me an opportunity to play Division I baseball, and those were the four most fun years of my life. We are all gonna be life-long friends for sure.”

For all of the good feelings, however, the finish was still sudden. After getting blown out 8-1 in the first game of Monday’s doubleheader, the Golden Eagles got out to a 5-1 lead in the fifth inning of game two.

They were outscored 7-1 over the last four innings, and didn’t score at all in the last three against a Mississippi State bullpen that was running on fumes while playing its fourth game in two days.

Berry was ejected arguing a call in the eighth inning, and Southern Miss hit into four double plays in the finale.

“State competed, and they put the pressure on and we didn’t make some plays that we needed to make,” Berry said. “They forced the issue with it and all in all, I thought our guys, and especially our pitchers, really stepped it up when we needed it most.”

Now the Golden Eagles will begin the annual retooling job all college baseball teams must undergo. There are only four seniors on the roster — Burdeaux, infielder Tracy Hadley, and seldom-used pitchers Keller Bradford and Hunter Stevens — but a few others could opt to leave if they’re picked in the major league draft.

Among the players certain to return are Wallner, who set a school record for home runs by a freshman with 19, All-Regional selections Braley and Mason Irby, and Slater, who was 5-for-8 with a home run, two RBIs and two runs scored in Monday’s doubleheader.

Slater, like his teammate Burdeaux, tried to focus on the great ride and the bright future ahead.

“Definitely not the way we wanted to go out, it was pretty heart-wrenching. We had a great season and it’s something we will have for our lifetime,” Slater said. “I want to thank a few great guys who did everything for our program, Tracy Hadley, Dylan Burdeaux, Hunter Stevens, for all the support they gave us this year. I wish them the best of luck in the next step forward.”

Mayor George Flaggs Jr. won each of the city’s 11 precincts on the way to winning a second, and he... read more