30 percent of voters turn out for city’s general election 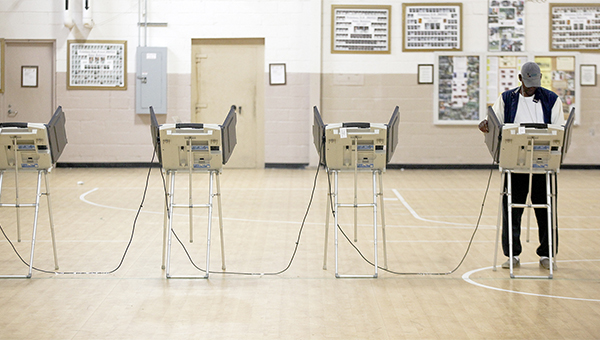 A total of 3,871 voters, 30.5 percent of the city’s 12,766 registered voters, turned out to cast ballots — either at the polls or absentee — in Tuesday’s general election for municipal offices.

The total turnout exceeded the 24.21 percent turnout for the May 2 Democratic primary, but election officials were dismayed by the still low turnout, which was less than the 2013 elections, when 31 percent of the voters cast ballots.

Election Commission chairman Clyde Redmon said part of the low turnout may have been caused by the rainy weather, which hit the city early Tuesday morning and continued off and on during the day.

“We never get the turnout we expect to have,” he said.

Redmon said the election went smoothly, adding there were a few minor problems involving people calling to find their precinct, which was a similar problem in the primary.

The race for South Ward alderman was resolved after affidavit ballots were counted Wenesday, with Alex Monsour getting  942 votes, or 50.13 percent, to 934 votes, or 49.71 percent, for incumbent South Ward Alderman Willis Thompson.

In the other races, complete but unofficial results show Mayor George Flaggs received, 3,076, or 78.81 percent of the vote to win re-election to a second term as mayor, which he said will be his last. Daryl Hollingsworth was second with 705 votes, or 18 percent, and Willie Robinson had 115 votes or 2.95 percent.

The referendum for the special 2 percent sales tax to fund the proposed sports complex also passed, getting more than the state mandated 60 percent of the total number of voters casting ballots in the election. The final tally was 2,430 votes, or 63 percent, for, to 1,422, or 36.9 percent against.

Monsour needs every ballot to unseat Thompson in race…