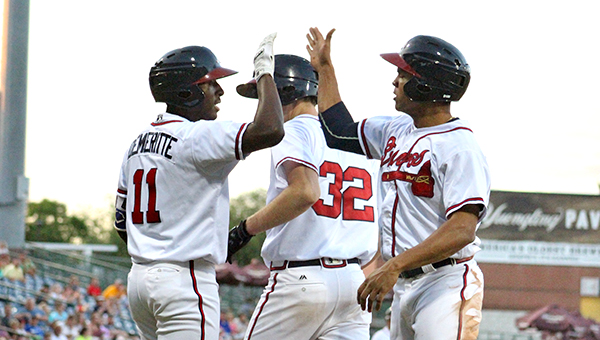 M-Braves work to get past Biloxi

PEARL — The Mississippi Braves are still chasing the Biloxi Shuckers in the standings, but have their in-state rival’s number when it comes time to go face-to-face.

Reed Harper drove in the winning run with a sacrifice fly in the bottom of the 12th inning Wednesday, and the M-Braves beat the Shuckers 5-4 at Trustmark Park.

The M-Braves (30-29) won for the fourth time in five games overall, and the third time in four games in this series with one left Thursday at 7 p.m in Pearl. They are 6-3 this season against Biloxi.

Biloxi (31-28) still leads the M-Braves by one game for second place in the Southern League South Division, with 11 left before the standings are reset at the all-star break. Pensacola (33-26) is in first place by two games over the Shuckers and three over the M-Braves, and will begin a five-game series with Mississippi Friday night in Pensacola.

Ronald Acuna had two hits and drove in two runs for the Braves Thursday. Jared James went 2-for-6 with a double, RBI and a run scored as the M-Braves rallied for runs in the ninth, 10th and 12th innings.

Trailing 3-2 in the bottom of the ninth, James delivered a two-out single to bring in Sal Giardina with the tying run. After Biloxi scored on Michael Choice’s RBI double in the top of the 10th, Giardina hit a sacrifice fly with the bases loaded to tie the game once again at 4-all.

Finally, in the 12th, the M-Braves held serve in the top of the inning and broke through in the bottom. They loaded the bases with a leadoff single by Joey Meneses, an intentional walk to Levi Hyams, and a throwing error on a grounder by Connor Lien.

Meneses was thrown out at home on a fielder’s choice for the first out of the inning, but Harper drove a ball to center field to bring in Hyams with the winning run.

Meneses and Lien both finished with two hits for the Braves, and Michael Mader (4-3) got the win with one inning of scoreless relief. Former Southern Miss star Bradley Roney pitched two innings, and allowed one run on two hits.

The teams combined for 21 hits in the game, as well as 27 strikeouts.

Before the game, the Southern League all-star rosters were announced and both the M-Braves and Shuckers were well-represented. Mississippi had seven players named to the team, and Biloxi had five.

Ramsey has 14 saves this season, but blew his first one Wednesday night by giving up the tying run in the ninth inning. Dubon had a single and scored a run.

The Southern League All-Star Game is June 20 in Pensacola.

It’s been a great season for state’s college teams

What a year this has been for college baseball fans in Mississippi. From the smallest of schools to the largest,... read more