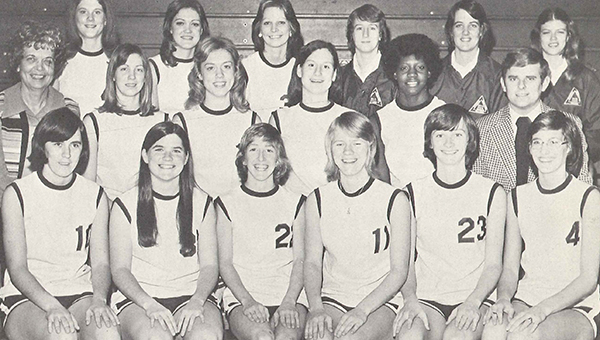 After they’d won two women’s basketball national championships in a row, Mary Logue knew she and her Delta State teammates were kind of a big deal. She just didn’t know how big until early in her final season.

“We played in Madison Square Garden,” Logue said, referring to one of the most famous arenas in basketball, “and there were three games. Two were major East Coast basketball teams — men’s teams — and Delta State was the headliner. That’s when we realized, ‘Wow, a women’s team is headlining over these guys’ teams.”

Forty years later, the Lady Statesmen are once again a big deal. The 1975, ’76 and ’77 national championship teams will be honored this weekend with the Trailblazer Award during induction ceremonies at the Women’s Basketball Hall of Fame in Knoxville, Tenn.

The Delta State teams won’t be part of the Hall of Fame’s Class of 2017, but will be recognized during the ceremony and have an exhibit at the Hall showcasing their accomplishments. The Trailblazer Award is given to a team or organization that played a role in the game’s early development.

“It’s something I never expected as far as our team as a whole,” said Logue, a Vicksburg native who now lives in Tioga, Texas. “We set a lot of high bars back in the 70s. While that was an excellent honor, this is an honor, too.”

Delta State went 94-4 during its dynasty, and only lost once during its first two championship seasons in the Association for Intercollegiate Athletics for Women.

The AIAW was the governing body of women’s basketball until the NCAA took it over in the 1981-82 season. Although it became a Division II school in the NCAA, Delta State took on and beat a number of high-level Division I programs. Included in the 94 victories from 1975-77 were ones over Ole Miss, Mississippi State, UCLA, Tennessee, Louisiana Tech, Florida State and Alabama. The Lady Statesmen beat LSU in the 1977 national championship game.

Among the players contributing to the remarkable run were three from Vicksburg — Logue, her cousin Ann Corley, and Pam Piazza.

Corley played on Delta State’s first championship team, while Logue and Piazza came along for all three.
Corley, who was a couple of years older, also played two years at Hinds Community College and had to learn some fundamentals on the fly.

In those days, high school girls basketball was played with three players on either side of the court, one of which was a “rover” who could play on either side. Corley played on the defensive end and never had to shoot the ball until she got to college.

“I was a guard, so I had to do a lot of shooting practice to compete,” she said. “I was handicapped in that I didn’t know how to move without the ball.”

Logue, meanwhile, was a 5 foot, 11 ½ inch forward who grew up as the game evolved. She and Piazza both played the 3-on-3 version of the game, as well as a 4-on-2 modification, but the rules changed to 5-on-5 when she entered high school at Warren Central.

“I’m the shortest person in my family, and I had three older brothers. It was a matter of keep up or fall by the wayside,” Logue said. “I learned from my brothers how to play the game. I owe a lot to them, even though they considered me a pest for hanging around.”

None of the Vicksburg players had storied careers at Delta State. Although they contributed, it was mostly in a backup role to bigger stars. Logue left the team during her senior season to focus on her academics as a pre-med student.

That hardly diminished the pride they feel, however, at being part of Delta State’s rich history as well as the fabric of women’s basketball itself.

“It’s super that we’re being recognized. We accomplished a lot and set a lot of records. At one time we had the most consecutive wins in the history of the game,” Logue said. “We got to play in some fabulous arenas. We played in Madison Square Garden, in the Spectrum in Philadelphia, all of these NBA locations. It was really special.

“The four years we were there went by so fast because we were always being recognized,” Logue continued. “It was a special time. I cherish that time.”