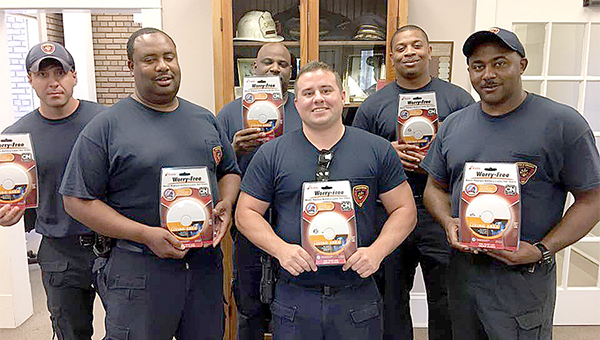 Members of the Vicksburg Fire Department will come to your house and install a free smoke alarm. If you would like to be added to the list call 601-636-1607.

In the event of a house fire, a functioning smoke alarm can be the difference in everyone making it out of the home safely.

To help keep residents safe, the Vicksburg Fire Department and the Warren County Volunteer Fire Departments all have free smoke alarms available for households in need.

“We have a limited number,” Vicksburg deputy fire chief Craig Danczyk said. “We’re trying to target the households that truly need them more than others. That can be senior citizens, it can be those on a fixed income, maybe if there is somebody in the household with special needs or a disability where they feel the smoke detectors is even more necessary.”

The city and county each have about 100 detectors available, and they will even come out to your house to properly install them and inspect those that are already in place.

“[The smoke alarm] has a 10-year gel pack battery that won’t fit in the remote control or whatever people take them out to put them in something else. It has a gel pack that will last 10-years.”

It is important to check your existing some alarms to make sure the battery is functioning and that they are not expired. The life span of a smoke alarm is 10-years, and those that have expired should be replaced with new ones.

“If you have an older smoke detector and it’s older than 10-years, it’s probably time to go,” Danczyk said. “Some of those sensors and electronics degrade over time. It may still function, but as a rule of thumb, 10-years is a good number to say it’s time to replace it.”

Danczyk said they try to install two smoke alarms in every household that requests them, and they will continue to do so until their supplies run out.

“People can call us, we will put you on our list and we can come to your location and install them as long as we have them on a first come, first serve basis,” Danszyk said. “We don’t have enough to give every household in Vicksburg one, but we are trying to get those to the people that need them the most.”

Danczyk and Briggs each said that having correctly installed smoke alarms, especially near sleeping areas, is important to saving lives in the event of a fire.

“It is absolutely important,” Danczyk said. “Most people, if they are the victim of a fire death, it is usually the smoke.

“We don’t recommend having a smoke alarm in the kitchen, because you often times have false alarms from cooking. But bedrooms, hallways near bedrooms, living areas, those are some of the area of the home we would say are a priority.”

You can be added to the city’s list by calling the fire department at 601-636-1607. For residents in the county, you can call Brigg’s office at 601-631-8806, and firefighters from the department in your district will come install them.

With alderman position in hand, Monsour will now bid…