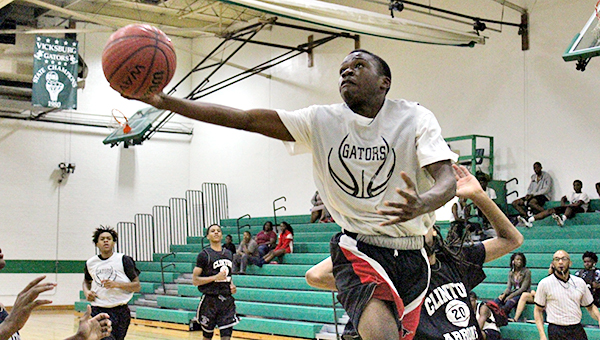 It’s a summer of transition on Drummond Street.

For the first time in 25 years, there’s a new coach on the bench leading Vicksburg High’s boys’ basketball team. Six seniors from last season are also gone, including the top two scorers. Their replacements are able, but learning on the job and searching for a new identity.

The season won’t begin for another five months, but the Gators are using June to forge ahead through the changes and find their footing as they enter a new era.

“It’s a big-time transition,” said Kelvin Carter, the longtime VHS assistant who is taking over as the head coach for the retired Dellie C. Robinson. “We don’t have a man in the middle nearly as talented as (graduated forward Kirk Parker). So it’s going to be a slow roll. But I believe we’ve got some talent. We just have to increase our basketball IQ and learn the game a little bit more.”

The Gators are definitely getting a chance to learn. They played twice on Thursday, against Clinton and Warren Central, to bring their total to 16 games in the past three weeks. There’s 19 more before the summer practice period ends.

In addition to the exhibitions like Thursday’s doubleheader, the Gators are heading to camps at Mississippi College and Southeastern Louisiana, as well as a Jackson Public Schools League. There’s no trophy at the end — no official book was even kept for the games Thursday, which were played with 20-minute running clocks for each half — but instead just valuable experience that will serve the team well six months from now.

“We’re playing a full season and then some. We’ve already played 15 games,” Carter said after the loss to Clinton. “But that was my goal. (In 2011), we went 0-12 before we won a game that summer. You have to go through the storm. I understand that. I’ve just got to get them to understand that, because we’ve got a lot of guys that think they can do it by themselves and the skill level is not there.”

The 2011-12 team was similar to this one, Carter noted. Both times, the Gators lost talented big men — Mychal Ammons from 2011’s Class 6A runner-up, and Kirk Parker this season — and returned a young, guard-oriented roster.

The 2011-12 team faded in the second half of the regular season but was in the Class 5A championship game two years later. Carter is hoping the crash course they’re getting right now, and throughout next winter, will lead to the same results.

“I just wanted them to play some ball so they can get some game experience, and I think that’s the biggest thing is just floor experience,” Carter said. “They practiced with Kirk and D.T. (Richardson) and all of those guys but they didn’t get a lot of floor experience. There’s two out there, maybe three, that have experience.”

The inexperience has shown lately. The Gators are 5-6 in their last 11 summer games and couldn’t seal the deal Thursday against Clinton. After trailing by as many as 11 points midway through the second half, Vicksburg cut the deficit to five with less than two minutes left. It then missed its last six shots and wound up losing 39-32.

The Gators bounced back a few hours later to beat Warren Central, 55-45, in the second half of the home doubleheader.

“We’re up and down. The consistency is all off right now,” Carter said.

Carter, though, added that he’s OK with that — as long as the Gators learn from it.

“We’ve been in it with good teams. We’ve just got a lot to work on, and game experience is what’s going to get us over the hump, so we’re trying to get a lot of games in,” Carter said.

A Hattiesburg contractor was the low bidder for a project to realign and pave Henry Lake Road. Warren County supervisors... read more