LSU sees run as more than a streak 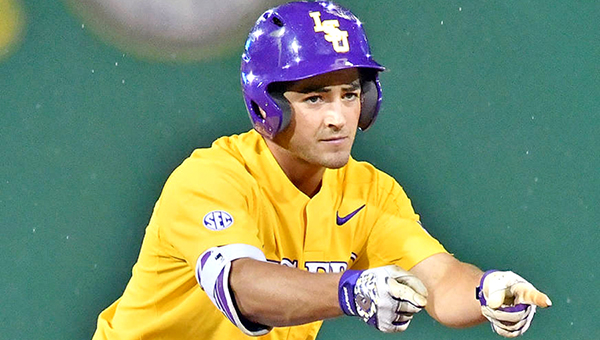 LSU’s Josh Smith points toward his teammates after getting a hit in last week’s regional against Rice. The Tigers will host Mississippi State in a super regional series beginning Saturday night. (Steve Franz/LSU Athletics)

BATON ROUGE, La. (AP) — LSU coach Paul Mainieri hardly seems surprised by his team’s current 14-game winning streak, which is now part of a 21-game stretch in which the Tigers have won 19.

It sounds like he saw it coming, even if others didn’t when the Tigers were stumbling in midseason.

“I always felt that we were OK and that we were on target, honestly. I wanted our team to be the better team at the end of the year,” said Mainieri. “If you’re perfect in the middle of the year, how do you maintain that for an extended period time?

“The team got better. We got more consistent. And all the facets of our game started to play better at the same time.”

In late April, one might have wondered whether Louisiana’s flagship college program was even the best team in its own state.

Tulane beat the Tigers in both meetings this season. LSU also lost both of its games against the University of New Orleans, where Mainieri once played. There was another loss to McNeese State. LSU narrowly survived its lone meeting with Louisiana-Lafayette, winning 3-2.

The Tigers have lost only twice since their second setback against Tulane on April 25. LSU’s recent surge has included a three-game road sweep of this weekend’s opponent.

Mississippi State first-year coach Andy Cannizaro, who previously served as one of Mainieri’s assistants at LSU, wants his squad to embrace the challenge of facing the Tigers.

“If you’ve got to get to Omaha, why not try to go through LSU?” Cannizaro said. “They’re a program that’s accustomed to going there.”

LSU, seeded fourth overall in the tournament, has scored nine or more runs in nine of its last 12 games, outscoring opponents 109-35 during that span.

“The last few weeks has just been something special and when you get on a hot streak like this you want to ride it as long as you can,” senior shortstop Kramer Robertson said. “But it’s been going on so long, I don’t know if necessarily you can call it a hot streak. We really are a good team and we’re just starting to put it together.”

Expectations were high entering the season because some of the top veterans were back, from starting pitchers Alex Lange and Jared Poche to Robertson and power-hitting right fielder Greg Deichmann.

Still, some young, unproven players had to grow into key roles.

Walker (8-1, 3.46 ERA) locked up the role as LSU’s third starter and has been on the mound when LSU clinched the Southeastern Conference regular season title, the SEC tournament crown, and last weekend’s regional. In his last start, the righty lasted into the ninth without reaching one three-ball count.

Now LSU is back to where it was this time a year ago, when it lost a super regional to eventual 2016 national champion Coastal Carolina.

“I’ve been preparing for this weekend since Coastal Carolina walked off on our field last year and dogpiled on my position,” Robertson said. “I’ve thought about it every single day. There have been nights when I toss and turn thinking about it.”

Justice of the Peace prepares for his 500th wedding