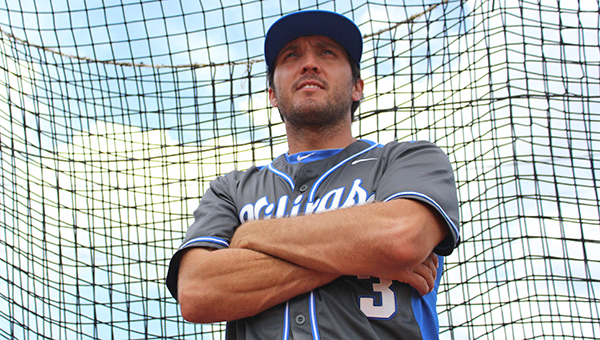 Warren Central’s Conner Douglas is the 2017 Vicksburg Post baseball Coach of the Year. He led the Vikings to a 17-15 record and the second round of the Class 6A playoffs. (Ernest Bowker/The Vicksburg Post)

In sports, there are seasons where everything clicks and a team goes on a championship run. There are also seasons that are obvious and total disasters.

Then there are seasons like the one Warren Central’s baseball team had.

The Vikings replaced nine starters from 2016 — seven every day players and two pitchers. Their pitching staff endured injuries and inconsistency, and they couldn’t seem to win a close ballgame.

Through all of the ups and downs, the Vikings persevered. They finished 17-15 and reached the second round of the playoffs before losing two close games to Tupelo.

The man guiding the team through the minefield to success was coach Conner Douglas. He found solutions to thorny problems and kept the program on an upward trend, and for his work is the 2017 Vicksburg Post baseball Coach of the Year.

“That was a tough year for us, with the injuries we had and a lot of the guys we lost,” Douglas said. “You only had two or three guys with experience. It was a learning curve, but it was a fun year.”

It’s the fourth consecutive year that Douglas has won the award. He is 97-57 in five seasons as the head coach.
Senior catcher Tyler McRight, a three-year starter, said Warren Central has developed a winning culture on Douglas’ watch that helped carry them through this season.

“The culture has a lot to do with it. But he held it all together,” McRight said. “He kept us together, and from not getting down.”

Throughout the season, Warren Central dealt with different issues. Early on, it was inexperience with essentially an entirely new starting lineup. Eventually, that gave way to problems on the pitching staff.

Junior Aaron Greene and sophomore Farmer Abendroth, who both throw 90 mph, were expected to overpower opponents. Greene suffered a minor arm injury that kept him out for the second half of the season, while Abendroth came in late from the basketball team and never fully gained command of his pitches.

Douglas and his coaching staff, however, found an unlikely ace in Christian Oakes — a junior who began the season as a reliever — and got contributions from strike-throwers like Logan Stewart and Vantrel Reed.
Seven pitchers threw at least 15 innings by the end of the season, a testament to both the chaotic quest to find reliable arms and the system that developed enough to get through it all.

The lineup went through similar shuffles, most of it by design. Seventeen of the 31 players on the roster played in at least 10 games. Only four played in all 32.

“We always tell guys if you work hard you’ll get opportunities, and we try to stand by what we tell them,” Douglas said. “We want to shuffle them in and out and find that chemistry. We’re blessed to have 20 guys that can compete.”

Throughout the season, the Vikings struggled to catch the breaks that could have easily improved on their 17-win total.

In all, Warren Central was just 2-8 in games decided by one or two runs, and 0-3 in extra-inning games.
Douglas painfully recounted a few of the bad breaks, like a sure run-scoring hit in a 3-2 season-ending loss to Tupelo that ricocheted off an umpire and turned into an out. He also pointed to those as signs that his team was among the contenders in Class 6A.

Unlike this season, the Vikings will have seven regular starters returning in 2018 as well as pitchers Greene, Abendroth and 2017 Vicksburg Post Player of the Year Christian Oakes, who allowed three earned runs in 37 innings.

The freshman and sophomore classes are also deep and talented, with players like Reed (.385, 14 doubles, 23 RBIs), Sean Daily (.349, eight doubles, 16 RBIs) and Caleb Sterling (.313, 17 RBIs) who have already seen significant playing time ready to step into even bigger roles.

This year might have been tough, but Douglas is more than optimistic about the dividends these trials can pay in 2018, ’19 and ’20.

“We’re real excited about the next few years. The young guys are already chomping at the bit to get back out there. They didn’t want to leave on a loss, and that’s what you want to see,” Douglas said. “We’re playing a full summer schedule. The guys are working out three or four times a week. They didn’t want a break because the sour taste is still in their mouths. You can see it when they’re taking the field that they really enjoy being out there and being together.”

Warren County officials and Harry Gilliland of HHG LLC are expected to close the sale of the Magnolia Road property... read more