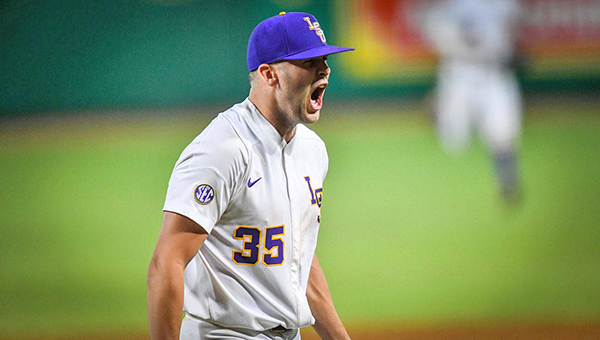 LSU starting pitcher Alex Lange reacts after getting an out Saturday against Mississippi State. Lange had 10 strikeouts in 7 2/3 innings as LSU won, 4-3, in Game 1 of the super regional series between Southeastern Conference foes. (LSU Athletics)

The Tigers scored four runs in the bottom of the eighth inning and beat Mississippi State 4-3 Saturday night in Game 1 of an NCAA Tournament super regional at Alex Box Stadium.

LSU has won 10 of the last 11 series between the Southeastern Conference opponents. Saturday’s game was their 387th meeting since 1905, but first in the NCAA Tournament since the 1998 College World Series.

Greg Deichmann doubled in two runs during the game-winning rally, and then scored the tying run on a single by Zach Watson. After a single by Beau Jordan and an intentional walk, Watson scored on a sacrifice fly by Michael Papierski to give the Tigers a 4-3 lead.

Mississippi State — which has 25 come-from-behind wins this season — got the tying run to third base in the top of the ninth after Elijah MacNamee led off with a single, but he was stranded there. LSU reliever Zack Hess struck out Hunter Stovall on three pitches to end the game.

The late rally and failed comeback capped a tense game — and an otherwise flawless one for Mississippi State.
Starting pitchers Konnor Pilkington and Alex Lange went toe-to-toe into the eighth inning. Lange struck out 10 batters in 7 2/3 innings, and after giving up a run in the first inning retired 19 of the next 21 batters.

Lange’s streak was broken in the top of the eighth by a one-out double by Hunter Stovall. After an intentional walk to Brent Rooker, Cody Brown delivered a two-run double to put Mississippi State ahead 3-0.

Peyton Plumlee got through the seventh with the shutout intact — the inning ended when center fielder Jake Mangum threw out Beau Jordan at home to complete a fly out double play — but was roughed up in the eighth.
Plumlee allowed a walk and two hits, including the two-run double to Deichmann, before he was pulled for Riley Self.

Self (5-2) then gave up the hit to Watson to tie the game, as well the go-ahead run, and took the loss.
Mississippi State only had four hits in the game. Rooker walked twice and scored two runs. Antoine Duplantis, Jordan and Josh Smith had two hits apiece for LSU.