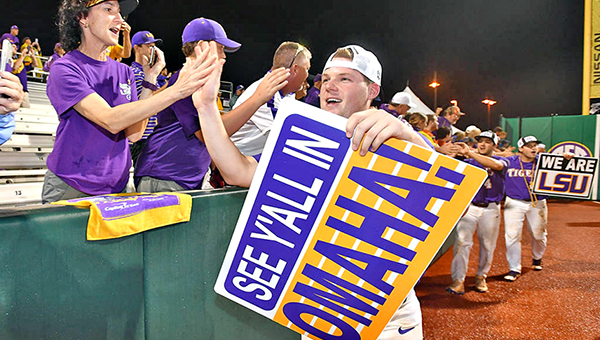 BATON ROUGE, La. (AP) — LSU shortstop Kramer Robertson, right fielder Greg Deichmann and second baseman Cole Freeman trotted toward their positions to start the bottom of the ninth inning, exchanged hugs with teammates, and walked arm-in-arm back to the dugout, soaking in a standing ovation.

The three seniors all could have left school when they were selected in the Major League Baseball draft after their junior year. To think of what they would have missed if they hadn’t returned — and it’s not over yet.
Omaha, Nebraska, awaits.

“I think we were all tearing up,” Deichmann said of the moment when he, Robertson and Freeman came out of a game at home for the final time. “We all said to each other, ‘We did it.’ Our goal coming back from last year was tonight. We accomplished that goal. Now we move on to our next one, and it’s the national championship.”

The game started about 35 minutes late, featured two other rain delays, and didn’t end until 1:36 a.m. It delayed a long-awaited celebration for Robertson, who did not accompany LSU’s 2015 College World Series team to Omaha after a sophomore season spent mostly as a reserve.

“It’s not like I haven’t waited long enough for this moment,” said Robertson, who was 3-for-5 with two RBIs and three runs scored. “I’ve waited my entire baseball career, my entire life to experience that dogpile and win a super regional, so I could wait through a couple rain delays.”

LSU swept the best-of-three series to earn its spot in the eight-team CWS field later this week in Omaha. Louisville, Cal State Fullerton, Oregon State, TCU, Florida State and Texas A&M have also advanced. Either Florida or Wake Forest will be the eighth team after they conclude their super regional on Monday.

“The train is rolling. I anticipate those guys are going to go to Omaha and win a national championship,” said Mississippi State coach Andy Cannizaro, a former LSU assistant. “They have the most dynamic lineup in the country. Everyone is playing at a high level right now.”

Mississippi State (40-27) had 25 come-from-behind victories this season, the most in the country, but ran out of magic on a rainy night in Baton Rouge.

The Bulldogs scored four runs in the third inning — two of them on a home run by Harrison Bragg — to take a 3-0 lead and chase LSU starter Jared Poche’.

That was the last hurrah, however, for a team that exceeded expectations all season long to reach the NCAA Tournament’s super regional round for the seventh time in school history.

“Our guys had an unbelievable ability to fight, never give up, and continue to persevere over so much that went against us this season. Our season is over and it is certainly a sad day, but in terms of the big picture and what this team accomplished this year, I can’t speak highly enough about them,” Cannizaro said. “We were picked to finish somewhere at the bottom of the SEC. Nobody gave us any credit. Nobody expected us to be here this weekend and we are here because we have some incredible senior leadership by some of the guys sitting up here right now that I cannot speak highly enough of.”

Gilbert held the line for the Tigers on the mound after that. He struck out six while allowing two hits and a walk over 5 2/3 innings.

The two hits he allowed were soft singles up the middle right after entering the game in the third inning. He then pitched five hitless innings and retired 15 batters in a row.

“Fortunately for us we had a young man come in and meet the challenge and do a tremendous job,” LSU coach Paul Mainieri said. “He put the team on his back, steadied the ship. … He minimized the damage and really dominated the game from that point forward.”

Mississippi State’s pitching staff, which had seemingly been patched together with duct tape for most of its postseason run, finally faltered at the end.

Starter Jacob Billingsley failed to get out of the first inning after giving up three hits, a walk, and two runs to the first four batters of the game.

Seven relievers followed, none of them able to find much success against the hard-hitting Tigers. Only Trysten Barlow, who pitched 1 1/3 innings, and Parker Ford, who got the last out in the top of the ninth, did not allow at least one run.

Four pitchers took the mound during a five-run LSU rally in the ninth inning.

Denver McQuary (3-4), the fourth pitcher of the game for Mississippi State, took the loss after giving up four runs in the fifth.