Twins take MSU’s Rooker in first round of draft 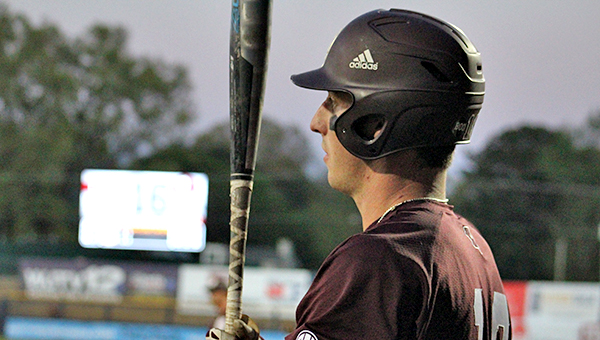 Mississippi State’s Brent Rooker waits on deck during a game this season. Rooker was selected in the first round of the Major League Baseball draft on Monday, with the 35th overall pick by the Minnesota Twins. (Ernest Bowker/The Vicksburg Post)

STARKVILLE — After a season in which he rewrote the Mississippi State baseball record books, Brent Rooker has a chance to continue his baseball career at the professional level.

The Bulldogs’ first baseman was selected by the Minnesota Twins in the first round of the Major League Baseball draft on Monday.

The Twins had taken Rooker in the 38th round last season before he opted to return to Mississippi State for his junior season. This time, they used the 35th overall pick on him.

Rooker is the 14th player from Mississippi State taken in the first round, all-time.

“The season that we had was worth every second of coming back,” Rooker said. “All of the hours I’ve put in grinding in the cage and on the field just to improve my game and improve myself as a player and a leader has paid off now.”

The decision to return to school paid off handsomely for both Rooker and the Bulldogs. He was named National Player of the Year by Collegiate Baseball and became MSU’s first-ever Southeastern Conference Player of the Year, in addition to numerous other honors.

He led Mississippi State to a 40-27 record, and helped them reach the super regional round of the NCAA Tournament.

Rooker finished his stellar season with a .387 batting average and a school-record 30 doubles. His 96 hits was eighth in program history for hits in a single season, while his 23 home runs was fifth in the MSU record books.

“I couldn’t be more excited for, first, the season we had, and then to get started with the Minnesota Twins organization,” Rooker said. “My goal was never to just get drafted. My goal has always been to make it to the big leagues. For me, this is the first step in a long process to reach my ultimate goal.”

The 22-year-old Rooker was selected in the compensatory round between the actual first and second round, but is considered a first-round pick.

The Twins also had the No. 1 overall pick, which they used on California high school shortstop Royce Lewis.
The 6-foot-1, 185-pound Lewis hit .377 with four homers and 25 stolen bases for JSerra Catholic High School, establishing himself as a top prospect with excellent speed and a solid bat.

“He’s got that ‘it’ factor that a No. 1 pick needs to survive and move forward and have success at the end of the journey,” said Mike Radcliff, the Twins’ vice president for player personnel. “He checked all the boxes for us.”

So did Rooker. After picking Lewis, Twins scouting director Sean Johnson said they were elated that Rooker was still on the board when they picked again at No. 35.

“He had a great year,” Twins scouting director Sean Johnson said. “We thought he was one of the best bats left on the board. We had our fingers crossed. It was 30 picks, but it felt like seven hours in that room. We’re glad he made it.”

Johnson added that Rooker could wind up in the majors sooner rather than later. The Twins consider him an advanced prospect that is expected to skip Rookie-level ball in the minors. He will be moved from first base to either right or left field as a pro.

“Rooker is an older college player, so he should be on the fast track,” Johnson said. “We’re looking at maybe (Class A) Cedar Rapids or (Class A Advanced) Fort Myers. He’s an accomplished hitter at an advanced age.”

With the second pick, Cincinnati took California high school right-hander Hunter Greene, one of the top two-way talents in a draft stocked with them.

Greene, chosen as a pitcher, also played shortstop at Notre Dame High School, but a fastball that can reach 100 mph has the Reds projecting him as a future ace. Greene, featured on the cover of Sports Illustrated this season, was the first of four prospects in attendance at the draft site to be selected.

At No. 3, San Diego selected North Carolina prep left-hander MacKenzie Gore, marking the first time since 1990 that the top three picks were all high school players.

Atlanta selected Vanderbilt right-hander Kyle Wright — who grew up a Braves fan — with the No. 5 pick, looking to augment a large stable of touted arms already in the team’s farm system.

LSU right-hander Alex Lange was picked by the Chicago Cubs at No. 30. His teammate Greg Deichmann, an outfielder, went to Oakland in the second round.

The draft continues with rounds 3-10 on Tuesday via conference calls with teams, and concludes Wednesday with rounds 11-40.