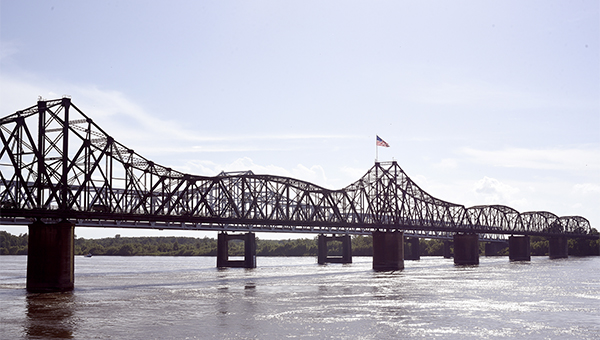 The Mississippi River rushes beneath the Old Highway 80 Bridge and the Interstate 20 Bridge Tuesday afternoon. The flood level of the river peaked at the end of May, when the river crested at 49 feet, six feet above flood stage level. (Courtland Wells/The Vicksburg Post)

After a month of being above flood stage, the Mississippi River has returned to ‘normal’

Almost one month after its waters rose above flood stage at Vicksburg, the Mississippi River is falling.

“Finally, slowly,” Warren County Emergency Management director John Elfer said. “It’s going to continue dropping, and by Thursday the 22nd (of June), it will be at 33.8 (feet), and that shouldn’t affect anything.”

Heavy rains in the Upper Mississippi Valley and along the Arkansas River in April and early May caused the Mississippi to reach a crest of 49 feet at Vicksburg near the end of May.

The high water forced city officials to close the flood gates at Clay and China Street streets on the river, and flooding closed several low lying roads, including streets in the Kings community and Ford Subdivision areas.

“It’s about time,” said Marty Pope, hydrologist at the National Weather Service Office in Jackson. “We have finally gotten into this where we are finally in a fall situation.”

The 28-day weather forecast, he said, indicates the river’s fall will continue, and the 16-day rainfall forecast does not show a lot of rain across the Mississippi River Basin.

“Unless we see any additional huge rains, right now it looks like it’s going to continually go down unless something really changes,” he said. “The (forecast) does have a couple of inches in the Ohio Valley, but that’s not really enough to … totally get things turned back around again.

Looking at the Vicksburg gauge, Pope said, “We are seeing maybe about a 4- to 5-foot fall over the next five days; if that happens, and we don’t get any significant rains in the backside area to keep the Mississippi up, that should go down in the next four to five days, and they should open that up, I would think.”

Greg Raimondo, public relations director for the U.S. Army Corps of Engineers, said plans are to open the Steele Bayou Structure once the river drops another 2.3 feet.

“It’s been falling about half-a foot per day, so about five days we’ll get there,” he said, adding Corps officials expect to possibly be able to open the structure about Saturday or Sunday and allow the backwater areas to drain.

“We’ll have that steady flow from there on out,” he said. “It’s not like it rushes out, it equalizes and the backwater goes down with the river.”

While some low county roads remained flooded, Elfer said, water has receded from the streets in Kings and Ford.

He said the area survived the flooding with no major damage to homes in the area.

“We mitigated all those flood properties after the 2011 flood, and either they were torn down, moved or were elevated, so that was the reason we didn’t have any flooded homes that I’m aware of,” he said.

832 vehicles show up to drop off paint, batteries, chemicals

Warren County residents Saturday got rid of lot of old household chemicals, used oil and other items during the county’s... read more