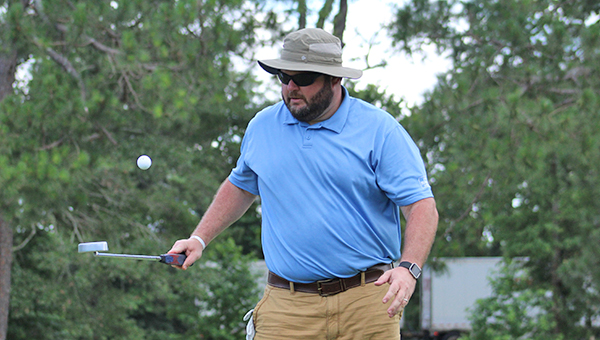 Bubba Nettles flips up his ball on the second green at the Gator Golf Classic Wednesday at Clear Creek Golf Course. The tournament was a fundraiser for Vicksburg High’s baseball and golf programs. (Ernest Bowker/The Vicksburg Post)

The Gator Golf Classic wasn’t a huge event Wednesday at Clear Creek Golf Course, but it was a harbinger of things to come.

The event served as the prelude to two months of tournaments at the public course in Bovina, ranging from the dozen or so people who participated in Wednesday’s fundraiser for Vicksburg High School’s baseball and golf programs to the more than 100 that will play in this weekend’s Bud Light Scramble.

“Every three or four days we’ve got something going on,” Clear Creek pro Kent Smith said.

The Bud Light Scramble is one of the oldest — and, traditionally, the biggest — tournament in Warren County. The event has been played for nearly 30 years at Clear Creek, and this year’s edition is expected to draw about 120 players from around Central Mississippi.

The Scramble was held in April for a number of years, but shifted to June after a fortuitous rainout. The tournament thrived in its new Father’s Day weekend slot.

“We moved it to June because of a rainout and it was a good turnout, so I just left it there,” Smith said. “It’s just a fun tournament. They get a lot for their money with food and prizes. It’s on Father’s Day weekend, so some of them are father and son teams. It’s carrying on a tradition.”

The Scramble has a new format for 2017. Instead of the familiar two-man format, this year there will be three-man teams. Smith said the goal was to make the tournament more competitive by reducing the number of flights, as well as to give players more bang for their buck.

The entry fee for the two-day tournament is $390 per team and includes not only the round of golf and a cart, but food and drinks both days. The top four teams in each flight will receive prize money — awarded in the form of credit at the Clear Creek pro shop — ranging from $150 for fourth place to $1,200 for first.

Registration is still open, and is available by calling the Clear Creek pro shop at 601-638-9395. The tournament begins at 8 a.m. Saturday, and Clear Creek will be closed to the public on Saturday and Sunday.

“You’re putting up $130 per man, and you’re getting all the soft drinks, beer and food you can eat. It’s a good deal,” Smith said.

The Bud Light Scramble is the first of five major events at Clear Creek between mid-June and mid-August. On June 24 and 25, the course will host its club championship for members only. A junior golf camp is set for the following week, from June 27-29.

“The only thing that’s restricted is the club championship, because you have to be a member,” Smith said.

The summer concludes with the annual Warren County Cup matches Aug. 19 and 20. The Warren County Cup is a Ryder Cup style competition between the top finishers from the respective club championships at Clear Creek and the Vicksburg Country Club.

The tournament begins with a shotgun start at 8 a.m. The entry fee is $400 per team, or $100 per golfer, for the four-man scramble. For information or to register, email MissMissGolf@gmail.com.

Drafted players all have hard work in common

The 2017 Major League Baseball draft came and went this week, and as usual Mississippi contributed its fair share of... read more