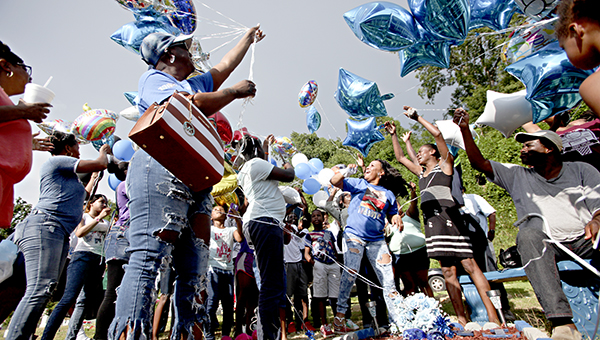 GUN VIOLENCE AWARENESS: Family and friends of Jerome ‘ Tutu’ Rankin, who was killed in an August 2016 shooting, release balloons honoring him at his gravesite Friday. The event was not only an honoring of Rankin’s birthday but to bring awareness to gun violence.

One year ago, June 7, 2016, Jerome Rankin lost his life in an early Sunday morning shootout at the Kangaroo at the intersection of U.S. 80 and Mississippi 27; a bystander in the wrong place at the wrong time.

Friday, a year and nine days after his death, about 30 of his friends and family ignored threatening rain clouds and claps of thunder to gather at his grave at Cedar Hill Cemetery and release balloons to celebrate his 23rd birthday and call attention to gun violence.

“We’re going to celebrate just the way he would have wanted to,” his mother, Sharon Williams, said. “And we hope this will also get people’s attention to stop the violence; put the guns down. He was just an innocent bystander. He had three children, and they ask, ‘When is daddy coming home?’ and we bring them out here and explain. They ask, ‘Why can’t daddy come back?’ ‘Why is daddy sleeping?’”

Gun violence, Williams said, affects more than the person who is killed. “It doesn’t affect just the family; it affects thousands of people. People need to realize that.”

Rankin was with a group of people who were gathered in the parking lot of the Kangaroo Express at the corner of U.S. 80 and Mississippi 27, when the shots rang out. Seven people were arrested in the shooting.

According to Warren County Sheriff’s Office reports, an argument began and several shots were fired by several different people, killing Rankin and wounding three others. One of those victims, Pinky Allen, who was paralyzed from the shooting, was at the cemetery for his friend. He said Rankin, who had the nickname, “TuTu,” was a giving person.

“Anything he got, you got,” he said. “He loved dressing up and loved having a good time.”

“People need to stop the violence,” she said. “It’s senseless; another life lost that didn’t need to die.”

Rankin, she said, worked hard at his job and worked to support his family, and didn’t deserve his fate.

At Cedar Hill, Rankin’s friends and family gathered around his grave, which had a wooden cross carefully placed on concrete pavers and surrounded by pine mulch, with blue flowers accenting the corners.

An inscription on his marker said, “Forever in Our Hearts,” and two mylar balloons — a 2 and a 3, representing his age — floated by the marker.

His mother, like many others there, wore a light blue T-shirt bearing her son’s picture and the date of his death on the left sleeve.

As they gathered to release the balloons, a gospel song was sung, followed by the count, “1,2,3,” and the balloons, aided by a southerly wind blew, off toward the north and gained altitude.

“Last year, we did a balloon launch at the store,” Marable said. “Right after we let the balloons go, it rained. That was God crying. We knew God accepted him into Heaven.”

While much of Vicksburg was just getting their day started Friday morning, 21 students from the University of Texas at... read more