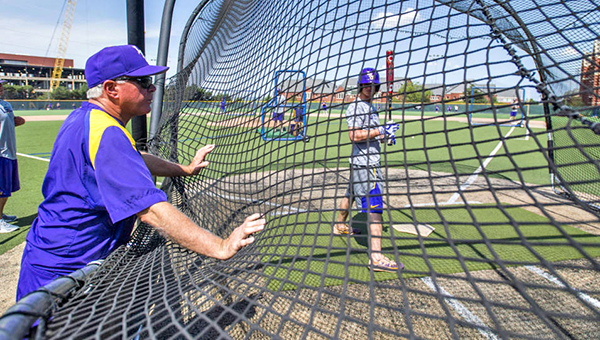 Without question, LSU and Florida State are two of the most storied programs in college baseball history.

They just don’t have a lot of history with each other, at least in the College World Series.

When the Tigers and Seminoles play each other in their 2017 CWS opener on Saturday night, however, it will be just the fourth time they’ve ever met on college baseball’s biggest stage. The last head-to-head matchup was in 2000.

All of that said, the reputation of both programs and their coaches clearly preceded them when they gathered Friday for a news conference at TD Ameritrade Park.

“(Florida State coach) Mike Martin is clearly a legend in the game, one of the greatest coaches in the history of our sport. When he retires, he’ll be the winningest coach in history without a doubt. I’ve long admired him, having grown up in the state of Florida,” LSU coach Paul Mainieri said. “And just to be out on the field with him, it’s the same way I felt when I coached against Augie (Garrido). You know you’re in the presence of greatness, and it’s such a great challenge for you as a coach. I’m just really looking forward to it.”

It makes sense that Mainieri would be excited. He’s gotten LSU to the College World Series for the fifth time in his 10 seasons in Baton Rouge, and he has one of the hottest teams in the country with him.

The Tigers have won 16 consecutive games, and 21 of their last 23. They’ve swept through the postseason despite some occasional bouts of uneven play.

“I love the confidence with which we’re playing right now,” Mainieri said in a press conference after the Tigers arrived in Omaha on Thursday. “We’re going to take this one step at a time, otherwise it seems too daunting of a task. If we get to a point where we’ve reached the finals, then we’ll talk about playing for a championship.”

The road to the championship won’t be easy for either the Tigers or the Seminoles. There are no World Series newbies this year, with the eight teams having combined for 90 appearances and 11 national championships.
The bulk of those come from Bracket One, which includes LSU, Florida State, Oregon State (54-4) and Cal State Fullerton (39-22). All except Florida State, which has never won it all, have won national championships since 2000 and all have made other CWS appearances this decade.

“I noticed you two didn’t say anything about our national championships,” Martin laughed after his colleagues took turns touting each other’s accomplishments at Friday’s press conference.

Oregon State plays Fullerton in the opening game Saturday at 2 p.m., and then LSU takes on Florida State at 7.
The pitching matchup for the late game will be LSU’s Alex Lange vs. Florida State’s Tyler Holton.

Lange was a first-round draft pick of the Chicago Cubs earlier this week. He led the Southeastern Conference with 134 strikeouts and needs 20 more — possible if he starts two games in Omaha — to become LSU’s career leader.

“Alex made a really critical mistake in his career. He decided to go 12-0 as a freshman and then improve from there,” Mainieri said. “That’s what everybody expected him to do. He has improved. Even in his sophomore year, I thought he made really great improvement, but his record wasn’t nearly what it was his freshman year.

“And now this year kind of the same type of thing,” Mainieri added. “He moved into the Friday night role about halfway through his sophomore year, and he’s been our guy.”

Before they watch the contestants walk on stage at the Miss Mississippi pageant, pageantgoers will have an opportunity to walk... read more