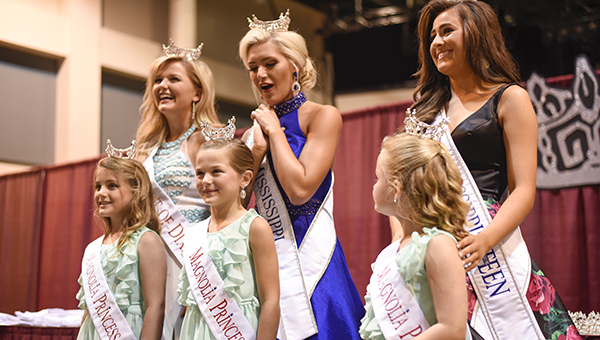 Royalty was in the house last night when 132 princesses were crowned at the Vicksburg Convention Center.

The event was part of the Miss Mississippi Corp. Magnolia Prince and Princess mentoring program.

Each local titleholder who will be competing in the Miss Mississippi Pageant serves as a mentor to the children, who range in age from 7 to 10 years, throughout their reign.

The children will also participate in stage production numbers during the Miss Mississippi Pageant.

“This is our first time to be princesses,” Abbie said, with sister Allie adding they were already having a lot of fun.

Both girls said they would someday like to be a contestant in the Miss Mississippi Pageant and participating in the Magnolia Prince and Princess mentoring program can serve as the first step to the crown.

Jarvis McGee Jr. is one of only three boys in this year’s pageant, and like the twins, this is Jarvis’ first time as royalty.

His dad, Jarvis McGee Sr., said Miss Riverland Joy Addison reached out to his son about serving as her prince.

McGee said serving as a prince is right up his son’s alley.

“This will be a good experience for him, and he likes to dress up and be in the spot light,” McGee said.

Lisa Boleware, who is a volunteer with the Miss Mississippi Pageant and serves as the Prince and Princess chairwoman, said this event is one of the highlights for the children who are part of the program.

“This is a spotlight on them, and it is a great way to begin the pageant week,” Boleware said.

Contestants, along with their prince and princess, will begin rehearsals today for the pageant that is set to begin this week.

The Miss Mississippi Parade will roll at 7 p.m. Monday in downtown Vicksburg followed by an autograph signing at the Outlets at Vicksburg.

Preliminary competitions will get under way Wednesday and run through Friday. The final night of the Miss Mississippi Pageant competition and crowning will be held Saturday. All competitions will begin at 8 p.m. at the VCC, 1600 Mulberry St.

All tickets are sold out for competition, but Saturday night’s final competition and crowning will be televised on WLBT, and it will be live streamed on the Miss Mississippi website.