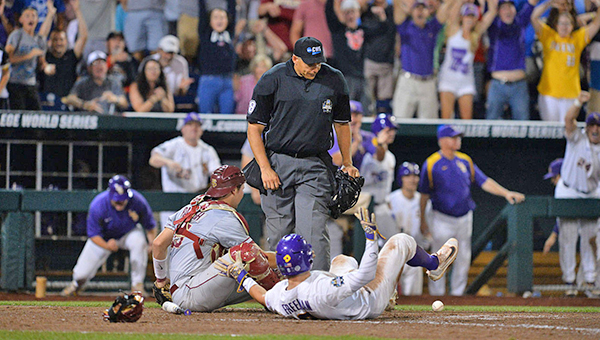 OMAHA, Neb. (AP) — LSU coach Paul Mainieri said his team wasn’t very sharp in its College World Series opener. It turned out the Tigers really didn’t need to be, not with Florida State’s follies in the field.

The Tigers scored their first run Saturday night when Antoine Duplantis came around all the way from first on a third strike wild pitch, and they tied it in the eighth when the Seminoles committed three errors on the same play.

Greg Deichmann followed with the go-ahead single in a 5-4 victory, LSU’s 17th in a row.

The Tigers advanced to a winners’ bracket game against top-seeded Oregon State, while Florida State will play Cal State Fullerton in an elimination game. Both games are Monday. Oregon State rallied from a four-run deficit to beat Fullerton 6-5 in Saturday’s first game.

“It was a little bit of a bizarre game,” Mainieri said. “I’m not sure I’ve ever seen a runner score from first base on a strikeout. I know you think we probably practice that play all the time, but we really don’t. I thought that our team didn’t really play that great, at least not up to our potential. Somehow we still found a way to win, which is really encouraging for us.”

“We made mistakes. We pay for them,” said Florida State coach Mike Martin, whose team is looking for its first national title in 22 appearances in Omaha. “We know it’s going to be a tough uphill battle. But I’ll tell you, and I mean this, I’ll take this bunch and go to battle.”

LSU (49-7) was down 4-3 when a bizarre sequence turned the game in the eighth. Cole Freeman reached on a base hit, and Duplantis singled past diving second baseman Matt Henderson.

The ball rolled past Steven Wells, and the right fielder was off-target with his throw trying to get Duplantis at second. Freeman headed for home, and third baseman Dylan Busby’s throw to catcher Cal Raleigh popped out of his glove as Freeman slid past. Wells was charged with two errors and Raleigh with one.

“That was a weird play,” Duplantis said. “I looked up, and things kept happening.”

Alec Byrd relieved Holton, and Deichmann singled through the right side against a pulled-in infield to bring home Duplantis for the lead.

The Seminoles (45-22) had runners on first and second in the ninth when Zack Hess ended the game with a strikeout of Busby.

Florida State got out to a quick 2-0 lead against starter Alex Lange, who labored in his six-plus innings. Lange walked Taylor Walls to start the game, and then Busby cleared the wall in dead center with his team-leading 15th homer of the season.

LSU’s first run scored on a freak play. Duplantis was stealing when Holton threw a wild pitch on what would go down as a dropped third strike. Duplantis took third on the play as Raleigh chased the ball and came home when Holton failed to cover the plate.

“I must admit I don’t think I can recall a man scoring from first base on strike three. Even when we used to play a long time ago in Little League, the backstop was a long way, way away. When I grew up, and I’ve seen some things crazy, but I never saw a guy score from first base on a strikeout. Tip your hat to them. The guy never stopped,” said Martin, who is in his 38th season as Florida State’s coach. “And you just have to know as a coach that it’s hard to cover that in practice. What are we going to work on? Covering home when we strike a guy out with two outs.”

Michael Papierski homered into the seats above the left-field bullpen on Holton’s first pitch of the fifth inning to pull LSU to 4-3.

Lange, the Chicago Cubs’ first-round draft pick, had difficulty controlling his fastball, and the Seminoles had their leadoff man reach base in six of the first seven innings. Lange allowed seven hits, walked four and struck out eight before coming out when he hit 9-hole batter JC Flowers to start the seventh.

Poche’ came on and allowed two singles, then turned the game over to Hess with two outs in the ninth. Poche’ said he has no problem pitching in relief at this point in the season.

“We talked about it throughout the week,” he said. “I’ll be ready when the coach calls on me again.”

Eleven teams within four shots of lead at Bud…