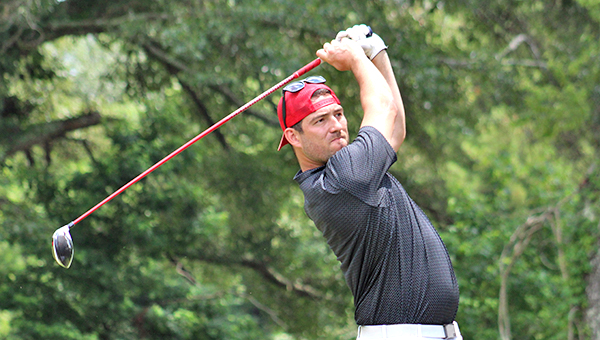 Jacob Paulk tees off on the third hole of the Bud Light 3-Man Scramble Sunday at Clear Creek Golf Course. Paulk and his partners David Adams and Dan Luke won the tournament with a two-round total of 120. (Ernest Bowker/The Vicksburg Post)

Less than a month ago, David Adams and Jacob Paulk were taking on some of the best amateur golfers Ireland had to offer. Comparatively speaking, conquering the field at the Bud Light 3-Man Scramble was a piece of cake.

Adams and Paulk teamed up with their friend and former Meridian Community College golfer Dan Luke to shoot a 61 on Sunday and win the tournament at Clear Creek Golf Course by one stroke.

Adams, Paulk and Luke had a two-round total of 120, finishing just ahead of the teams of Alex Malmay, Dale Cagnolatti and Max Cook; and Blake Lewis, Brad Taylor and Ottis Spurgeon. The latter two teams were at 121 for the two-round tournament and tied for second.

Earlier this year, Adams and Paulk finished well enough in a qualifying tournament to represent the United States in the inaugural International Kings Cup competition in Ireland. The amateur team match play event is sponsored by the Arnold Palmer Foundation and named in his honor.

This weekend they played for smaller stakes — $1,100 in merchandise from the Clear Creek pro shop, rather than international pride — but still proved their mettle. They teamed up with Luke to shoot a 59 in the first round Saturday, and then had the low score in Sunday’s final round.

The Malmay-Cagnolatti-Cook team also shot 59 on Saturday, but followed it up with a 62. Lewis, Spurgeon and Taylor also shot a 61 on Sunday, but had shot 60 in the first round.

Eleven teams started the championship flight within four shots of the lead, and the first-round co-leaders both faltered to open the door for others to rise up.

The Curtis family — father Timmy and his sons Channing and Cameron — shot a 58 on Saturday for a share of the lead. They followed that up, however, with a 67 on Sunday and fell back to seventh place with a two-day score of 125.

The other co-leaders, Judd Mims, Ryan Hoben and Brady Ellis, followed their first-round 58 with a 66 and dropped into a three-way tie for fifth.

In the consolation flights:

• Brian McCullough, Tyler Lum and John Martin had the low round in the first flight, with a 62, to overcome a two-shot deficit and tie for first place.
Brian Leach, Chris Queen and Jordan Eargle also finished with a two-round total of 128 to tie for first.

• Gerald Mims, John Robert Ward and Josy Murphy finished with a two-round total of 140 to win the third flight by one stroke.