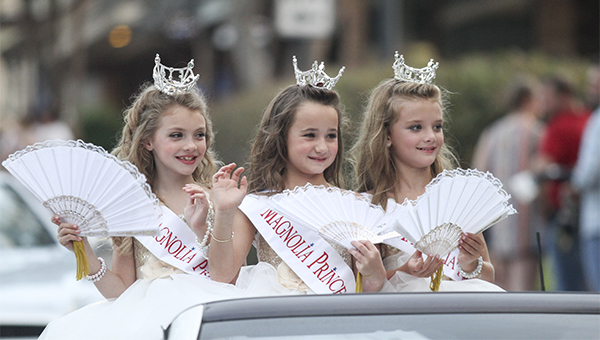 The Miss Mississippi Pageant contestants proved Monday evening that they will not let it rain on their parade.

Shortly before the Miss Mississippi parade was to roll down Washington Street, a large front passed through the area, but by parade time the rain had stopped.

“We were all really blessed that the rain stopped,” executive director of the Miss Mississippi Pageant David Blackledge said.

“I had been praying all day that the weather would clear.”

Blackledge said the same thing happened 10 years ago, when it was the 50th anniversary of Vicksburg hosting the Miss Mississippi Pageant.

The bottom dropped out before the parade, but then it turned off clear and cool, he said.

However, before the weather had subsided, contestants were not sure whether there was going to be a parade.

Miss North Central Mississippi Emily Tingle said she thought they might postpone the parade, “but we will still have the autograph party,” she said.

Following the parade all of the contestants were to sign autographs at the Outlets at Vicksburg.

Like Tingle, first time contestant Miss Neshoba County Fair Miriam Seale said she was not sure what the outcome of the parade would be.

“I am a little worried that we will not have the parade and everyone has told me how fun it is,” Seale said.

Miss Mississippi Pageant board member Johnny Reynolds, who was in charge of Monday’s event, said he was no stranger to rain and parades.

“At Miss America, I rode with three misses and it rained, but we had a ball. We had fun and Laura Lee was the best,” Reynolds said.

And with an optimistic attitude, he promised, he was going to make Monday’s parade happen and that he did.

Alicia Walker, whose daughter was one of the princesses in the parade, said she thought her daughter would have been disappointed if the parade had not taken place.

“I am glad the weather cleared up so the girls would have this experience,” Walker said.

Parade goers Keri Chisolm and Megan Costilow, who were on Washington Street to show support for Miss Mississippi State University Molly May, said they had come downtown early for the parade.

“We got here early to come downtown to shop a little bit and have some dinner and then come out to the parade,” Costilow said, adding that they were not sure how long they would have to be hanging out before the parade would begin.

In addition to the Monday’s autograph party, Group B contestants will be signing autographs from 10 to 11:30 a.m. Wednesday at George Carr, 2950 S. Frontage Road, and Groups A and C will sign autographs from 10:30 until noon along Washington Street.