Tigers, Seminoles out for redemption 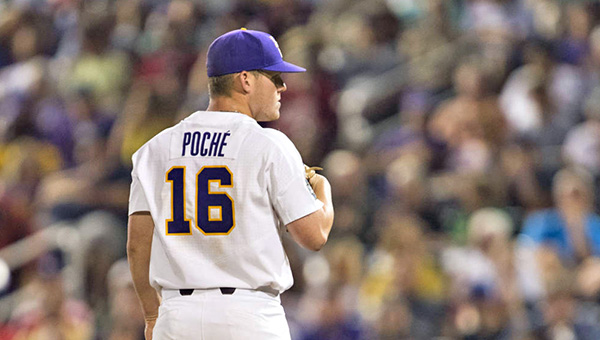 For four years, LSU has counted on Jared Poche’ to pitch them to victory.

In what might be the final start of his record-setting college career, the Tigers need him to do it one more time when it matters most.

Poche’ will get the ball for LSU (49-18) on Wednesday night, when it takes on Florida State (46-22) in an elimination game at the College World Series.

The senior left-hander, who is 38-12 over four seasons, needs one more win to set LSU’s career record for wins. He’s currently tied with Scott Schultz, who won 38 games from 1992-95.

“When our backs are against the wall, I can’t imagine any pitcher I’d want to run out there other than Jared Poche’,” LSU coach Paul Mainieri said at a press conference on Tuesday. “He’s a big-game pitcher, and he pitched great the other night.”

The other night was Saturday, when Poche’ came out of the bullpen to throw 2 2/3 scoreless innings in a 5-4 win over Florida State in the opening game of the CWS.

To get win No. 39, he’ll have to beat the Seminoles again and give the Tigers’ beleaguered pitching staff a lift. Eight pitchers — a College World Series record — issued 12 walks in a 13-1 loss at the hands of top-seeded Oregon State on Monday.

If the Tigers can get past Florida State, Oregon State awaits again. LSU would need to beat the Beavers, who have only lost four times all season, twice to advance to the championship series.

“We’re going to have to play great baseball for three straight days in order to get through this bracket,” Mainieri said. “But, I believe we can do it. Our guys are not going to press; they’re confident, they’re calm, and they know there’s a tremendous challenge in front of us. It’s an unbelievable opportunity for our players to show the world what they’re made of.”

While the Tigers are looking for redemption after their debacle against Oregon State, the Seminoles are trying to do the same for their first meeting with LSU.

Florida State allowed a run to score from first base on a dropped third strike, and another when it committed three errors on one play.

The Seminoles bounced back to beat Cal State Fullerton 6-4 in an eilimination game on Monday.

“Definitely we want to get another crack at them,” Florida State third baseman Dylan Busby, who homered in the first game against LSU, said in a school release. “We have some unfinished business.”

Cindy to bring rain … and a lot of…