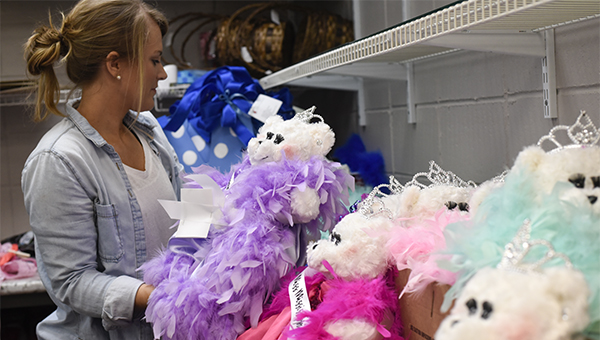 The shop ordered 200 plain white stuffed bears in January and started painstakingly decorating each one by hand in March.

“We start by getting the bears in, and I order them by cases,” Helen’s Florist owner Nancy Gray said. “I order them way before Valentine’s to get the white bears. You can’t get white bears after Valentine’s because they are all sold out.”

The first step is to trim the bears’ facial hair so it isn’t as “fluffy” Gray said, and then the staff at Helen’s works to prepare each bear for the pageant.

“We ordered the eyelashes, earrings, the crowns and then we start with the material deciding what colors we’re going to do and what we’re going to offer as a specialty color that’ll be different from the collection they have the year before,” Gray said.

The eyelashes were individually glued onto each bear, a touch of blush of added to the cheeks and each evening dress and swimsuit was handmade.

“We dressed 150 in eveningwear and we did 35 in swimsuit,” Gray said. “Swimsuit is something we started two or three years ago to do something different.

“It took us two months to get 150 in, and that was every night we’d take them home and ruffle and every weekend. It is some gluing that takes part of your skin with you. So each bear has a little bit of everybody in Helen’s Florist in it.”

The specialty bear for 2017 was dressed in a blue dress with a blue boa to celebrate the 60th anniversary of the pageant being in Vicksburg. The same blue was used in the pottery and ornaments that were made by Mary Kaylin Gray.

“People collect the pieces that have been in it the years before,” Nancy said. “Even if they’re not a contestant, they come back because it is something they add to their collection each year.”

Pageant week is one of the busiest of the year for the shop. Nancy said it is like having a week’s worth of Valentine’s Days, and the flower order is triple that of a normal week.

“We get to see a lot of people that come back year after year so we bond a special connection,” she said. “Some of the princesses that have been in it for two or three years, their parents come in, visit and talk.”

Years of practice have fine-tuned the shop’s organization system for the week and they work to make sure the right gifts get to the right girls and the contestants and princesses aren’t getting duplicates of the same gifts.

“We keep a big poster so it is like a registry,” Nancy said. “We write down each contestant and then put out the princess’s names. It helps keep us organized, but it also helps the children not get so much of the same things.”

With 44 contestants and 135 princesses taking part, the specialty items fly off the shelves. The two-tone blue anniversary bears and pottery were all sold-out by Tuesday and only a few ornaments remained.

“What is really hard for us is when someone comes in on Friday or Saturday and we are sold out and we don’t have any bears,” Nancy said. “The main thing is getting them early.”

Pageant week is far from normal for Jeni Fulcher and her staff at Ivey’s Place.

“You might as well just throw that word out, don’t even put it in the sentence,” Fulcher said. “It is just a fun fast paced time. Years ago, I’ve been in business 35 years, we were up to our elbows in rose petals and that was all you did, one dozen roses, half a dozen roses, now it has evolved into we get our gift shop workout.”

Fulcher said they work to personalize gifts for the each of the contestants from monogrammed vases and bottles to arrangements and gifts based upon the girls’ individual talents and bears for the princesses.

“It is just trying to make them unique and different,” Fulcher said. “It is just a total different week from any other week of the year. The contestants still get a lot of flowers, but we still try to do things for them that are very personalize.”

The staff at Rocky Mountain Chocolate have been “swamped” all week long manager Hannah Noble said. They have baked almost 300 rice crispy treat crowns and delivered chocolate gifts to the contestants at their hotel and the convention center throughout the week.

Miss Mississippi’s Outstanding Teen Holly Brand will even make an appearance at the shop Thursday to raise money for the Children’s Miracle Network.