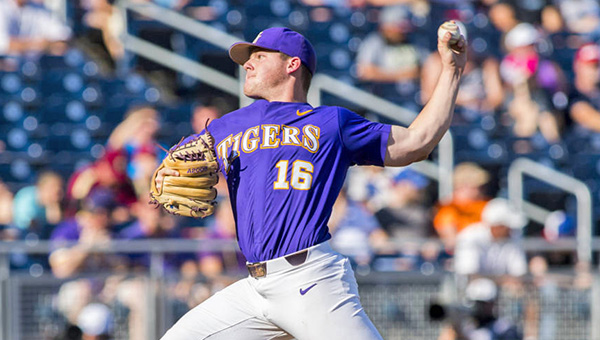 OMAHA, Neb. (AP) — Jared Poche’ returned to LSU for his senior season for moments like this. His freshman teammate, Jake Slaughter, just started making his memories.

Poche’ became LSU’s career wins leader with a splendid performance over eight innings, Slaughter hit his first home run in three months for an early five-run cushion, and the Tigers eliminated Florida State from the College World Series with a 7-4 win Wednesday night.

LSU (50-18) advanced to the Bracket 1 final against No. 1 national seed Oregon State, which beat the Tigers 13-1 on Monday. The Tigers have to beat the Beavers on Friday and again on Saturday to reach the best-of-three finals week.

Rather than think ahead to the daunting task awaiting the Tigers, the moments after the win over the Seminoles were a time to fete their reliable left-hander and the kid who got a start because coach Paul Mainieri had a gut feeling it was the right thing to do.

“Poche’ was just the man tonight,” Mainieri said. “He put the team on his shoulders and carried us to the promised land. We needed that win to keep our season alive to win our 50th game, to make the final four, to have a shot at Oregon State. There was a lot riding on this ballgame tonight, and Poché was a cool customer and just went out there and pitched as well as I’ve ever seen him pitch.”

Florida State (46-23) will go home without a national title for a 22nd time, and 16th under coach Mike Martin, who completed his 38th year as coach. No program has as many CWS appearances without winning the championship.

“It feels like we gave it everything we had, and it wasn’t meant to be,” Martin said. “We gave it our best shot. We never felt sorry for ourselves. We kept battling. There’ll be seven disappointed coaches to leave here. Am I disappointed? Well, if I’m not, I’m not much of a competitor.”

Poche’ left after Quincy Nieporte and Cal Raleigh homered on consecutive pitches in the ninth. Zack Hess, hitting 98 mph on the radar gun, struck out the side for his third save.

“If you had told me four years ago before I started my career at LSU that in four short years you’re going to be in Omaha and break the all-time wins record, there’s no way I would have believed that,” said Poche’, drafted in the 16th round by the San Diego Padres last year and in the ninth by the Oakland Athletics this year. “This record, it’s definitely not an individual award. Having guys making plays behind me, scoring runs for the games I throw, I see this more as a team award.”

Slaughter, making his first CWS start and batting out of the 9-hole, barely cleared the left-center fence when he connected on a hanging breaking ball from FSU starter Cole Sands (6-4) in the second inning. The homer, which made it 5-0 and ended Sands’ night, was Slaughter’s first since March 15 and third of the season.

“Believe it or not, Jake, moments continue to get better than this,” Mainieri told Slaughter at the postgame news conference.

Slaughter said he just wanted to put a good swing on the ball.

“When I hit it,” he said, “I really thought there wasn’t a good chance of it going out.”

Slaughter, who had been a pinch runner and pinch hitter in the Tigers’ first two CWS games, got the start in place of Nick Coomes. Mainieri said he put Slaughter in the lineup because he liked how he matched up against Sands.

“That’s the one spot in our order that has fluidity to it,” Mainieri said. “Coomes has done some really good things. He had two hits the first game and Jake hit the three-run homer today. Jake’s been having some really good batting practice sessions. Just went with a hunch.”