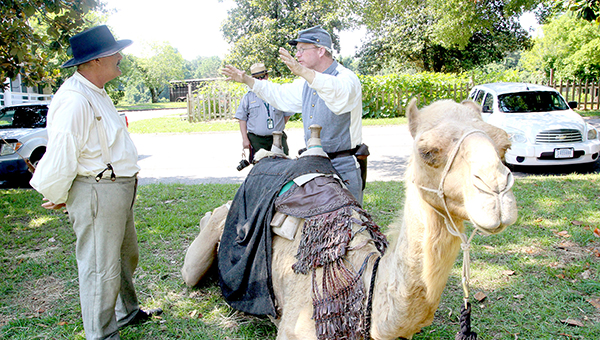 Two Civil War re-enactors discuss the use of camels by the U.S. Army and recall the story of " Old Douglas," the camel that was killed during the Siege of Vicksburg, during a visit by the Texas Camel Corps to the Vicksburg National Military Park in 2016.

The Texas Camel Corps, a re-enactment organization that teaches people about the use of camels by the U.S. Army in the 19th century U.S., will be at the park Saturday to commemorate the service of Old Douglas, a camel that served with the 43rd Mississippi Volunteers during the Vicksburg siege and campaign.

The camels will be available to the public from 9 a.m. to 3:30 p.m. Saturday at the Old Superintendent’s Quarters on Pemberton Drive inside the park. The event is free, but visitors will have to pay the entrance fee to the park.

“They’ll get to see the camels and he’ll explain their relationship to the Siege of Vicksburg,” he said.

The Corps’ visit to the park is its fourth. It visited the park in June 2016.

“He has been here a good bit,” Hamel said. “He started coming on the Sesquicentennial and has been back since. He’s been a good park partner.”

Camels were introduced to the U.S. Army in the 1850s, when then-Secretary of War Jefferson Davis had camels imported as an experiment to see if they would serve better than horses in the southwest, where the U.S. Army was engaged in wars with American Indian tribes.

The camels were later released and roamed wild in the southwest. Old Douglas was one of the ones the Army kept, and he served with the 43rd Mississippi carrying its band instruments.

Old Douglas was killed by a Union sharpshooter during the siege, and was eaten by the troops, who were low on food. He is remembered by a headstone among the Confederate dead in the Soldier’s Rest section of Cedar Hill Cemetery.