Keeping mind and body active is key of life 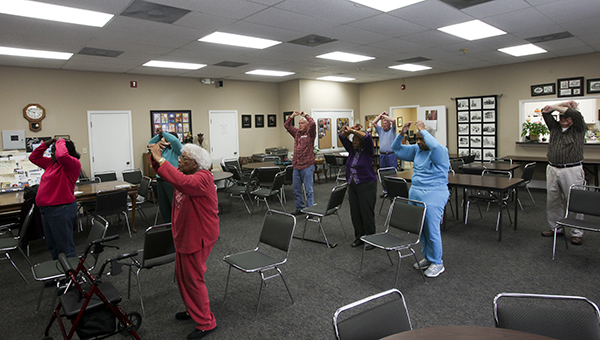 Vicksburg Senior Center members participate in chair exercises on Tuesday morning. The class is at 10 a.m. three to for times a week.

During the 16th century, the Spanish Explorer Ponce de Leon spent a lot of his time in the New World searching for the fountain of youth and the elixir that would help him live a long life.

The fountain of youth, as many who followed the famous explorer learned, is a myth. But two Vicksburg physicians say it is possible for people to age well as long as they follow some basic rules: stay mentally sharp, exercise, practice good nutrition habits and continue social interaction with friends and acquaintances.

“The old adage, ‘If you don’t use it, you lose it,’ applies to lots of different things; not just physically, but mentally,” said psychiatrist Dr. Phillip Scurria.

“It’s important to keep your mind active — doing things that will cognitively stimulate you, for example, crossword puzzles, reading, watching TV that engages you and teaches you something, and socializing with people.

“People who are isolative and don’t have friends or much social interaction are much more likely to have emotional and mental cognitive problems later.”

A lot of the mental aspect of aging, he said, depends on the physical issues people are dealing with.

“I have a lot of patients who are young but have very severe medical issues who feel older just because their bodies are breaking down. I think if you take care of your physical health that will take care of your mental health, also. And the better you feel physically.”

“The most critical issue is maintaining an active lifestyle with low impact aerobics, exercise, walking — things that are low impact that have good cardio to increase heart rate and help keep blood pressure down,” Edney said. “That, and a well-balanced diet, low-sodium, low fat, moderate carbohydrates, will take most people a very long way for any one who is using tobacco in any form, especially smoking, giving up tobacco will be probably the biggest thing they can do, and making sure no excessive alcohol. Those are the simple things anyone can do.”

People also need to keep up with preventive health measures, he said, including screening tests like a colonoscopy at age 50, going in for at least a wellness check every year, making sure their blood pressure’s good and their blood sugar and cholesterol numbers are good.

“They need to make sure their vaccinations are up to date. For people over 50, that means flu vaccine, pneumococcal (pneumonia) vaccine and their shingles vaccine.

The most common problem among older people, Edney said, is hypertension.

“That would be followed pretty closely, especially with overweight people, by heart disease or diabetes,” he said, adding another health care problem is progressive arthritis.

“If people are not active, they will have more bone and joint pain,” he said.

“Hypertension is related to genetics; it runs in families, and is closely associated with the amount of sodium in the diet,” he said.

The physical problems for aging men and women are very close, Edney said.

“Men will have a higher incidence of stroke and heart attack, but we have to remember the number one killer of women in the U.S. is heart disease, not breast cancer.

“Stoke and heart attack are very preventable if people are working with their doctor to keep their risk factors under control as they age.” Older women, he said, also have some conditions unique to them.

Women are at a higher risk than men to suffer from osteoporosis and are at risk for breast and ovarian cancer.

“If you look over the last 50 years, the average life expectancy has really gone up for men and women,” he said.

“Beginning at age 70, every year 5 percent (of the older population) develop some kind of cognitive problems, and every five years, it goes up another 5 percent.

“The average life expectancy is well into the 70s for men and women, and the older you get, the longer your life expectancy is, because so many young people die from car wrecks and accidents. So once you make it through those really dangerous years, hopefully, you’re using a little bit better sense when you’re older.”

Alzheimer’s, Scurria added, is actually a form of dementia, and there are a number of medical issues can cause dementia, including strokes, hypothyroidism, head trauma and alzheimer’s. Alzheimer’s, he said, is a condition that is diagnosed more by exclusion, because there’s no real definitive test for it.

“So if we make sure the thyroid’s fine, they haven’t had a stroke, then we rule out those kinds of things. Parkinson’s Disease is another cause of dimentia.”

There is also some evidence that dementia may be hereditary, he said. “It seems to run in families, so if a family member — mother, father, grandparents — had it, the risk is greater.”

To best of his knowledge, Scurria said, heart disease and diabetes are not causes for dementia, “But certainly, the poorer your health is and the more things you struggle with, the more likely you are to have cognitive decline, but I don’t think there’s a positive correlation between the two.”

Using good common sense, he said is probably the best thing people can do as they age.

“You need to stay engaged with your friends and surround you with people who are supportive, and time to think, to read, play chess; even word finds are things that I think really keep your cognitive thinking sharp, and there are the computer mind games, which are very good.

You have to exercise your mind just like you do your body.”

And if someone begins to notice problems, physically or mentally, Scurria said, “Don’t be afraid to ask for help. The longer you wait to have it checked, the harder it is for you to get help.”