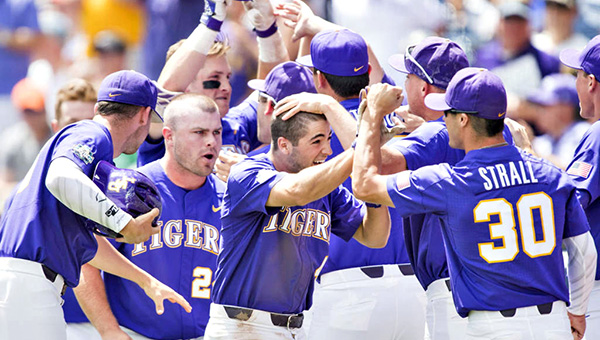 OMAHA, Neb. (AP) — Nothing LSU encounters in the College World Series championship series will be any more daunting than the task the Tigers had to complete to get there.

The Tigers had to beat an Oregon State team that owned the most formidable record of any team in four decades, and they had to do it twice.

They did in dominating fashion.

Caleb Gilbert held the No. 1 national seed Beavers to two hits in 7 1/3 innings, Michael Papierski homered from both sides of the plate, and LSU won 6-1 on Saturday a day after beating them 3-1.

“To lose four games the entire season, and we beat them two days in a row, it’s hard to predict those things to happen, but that’s why you have to play the games,” Tigers coach Paul Mainieri said. “Our kids embraced the challenge.”

The Tigers (52-18) won their third straight elimination game and will play either Florida or TCU in the best-of-three finals beginning Monday.

“It’s a tough day when you’ve had such a great year,” Beavers coach Pat Casey said. “Now is not the time to really think about that or talk about it, but I know there will be a time when they get to sit back and reflect and realize what they accomplished.”

Gilbert allowed an infield single and walk before Michael Gretler homered in the seventh. He struck out a career-high seven in his longest outing in his two seasons at LSU. Zack Hess allowed one hit the rest of the way.

“It’s a surreal feeling to be able to pitch your team, when the back’s against the wall in an elimination game, into the College World Series final,” Gilbert said. “I just had all the faith in the world in my teammates and my coaching staff and just really went out there and pitched my game, tried to attack early with a heater and get ahead and trust my defense behind me.”

Papierski became the first player to homer twice in a CWS game since TCU’s Bryan Holaday in 2010. He went deep from the left side off Bryce Fehmel in the second and the right side off Brandon Eisert in the fourth.

“I put some good swings on fastballs today,” Papierski said, “and after that, the wind helped a little bit. But that wasn’t the highlight of the game. It was Caleb Gilbert.”

The Beavers managed only a season-low two hits on Friday and the three against Gilbert and Hess on Saturday. They went the first 17 innings Friday and Saturday without having a leadoff batter reach base.

Gilbert retired the first 11 batters he faced overall. Over the course of two games, LSU’s pitchers retired 24 consecutive batters before Gilbert issued a two-out walk to Trevor Larnach in the fourth inning Saturday.

“A lot of the game we were taking a lot of defensive swings,” Gretler said. “We didn’t put any pressure on them.”

This marks the 18th year in a row that the No. 1 national seed won’t win the championship. Miami in 1999 is the only No. 1 seed to go all the way. That was the first year of the current tournament format.

Before Saturday, Oregon State hadn’t lost consecutive games since a five-game losing streak from May 6-13, 2016.

Fourth-seeded LSU bounced back from a 13-1 loss to Oregon State on Monday and reached the championship round for the first time since winning the national title in 2009.

The Beavers had made up a four-run deficit in a 6-5 win over Cal State Fullerton last Saturday, but Gilbert and Hess made that a nearly impossible task.

Oregon State’s postseason was tainted by the revelation that Pac-12 pitcher of the year Luke Heimlich had pleaded guilty to molesting a 6-year-old female relative when he was a teenager. Heimlich didn’t pitch in the super regional round, and he didn’t accompany the team to Omaha.

Details about the molestation came to light June 8 in a story published by The Oregonian/OregonLive. In an editorial accompanying the article, the newspaper said it learned about Heimlich’s 2012 conviction in Washington state after running a background check that it routinely does for in-depth profiles.

Fehmel made his third postseason start since the rotation was adjusted to account for the loss of Heimlich.

“This is a great team,” the Beavers’ KJ Harrison said. “For us to end up the way we were, obviously, it’s not the best. We wanted to win it all. As the days go on, it’s definitely a season to remember.”

Lady Vikes picking up where they left off