Camel presentation a part of the Siege of Vicksburg’s story 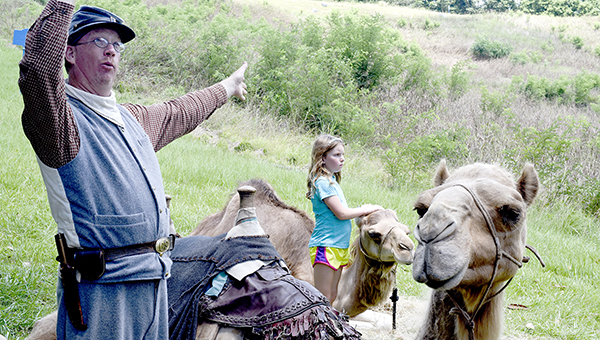 Ella Kate Boone, 9, pets Jadid the camel, 5, as Doug Baum, with The Texas Camel Corps, explains the use of camels by the U.S. Army in the 19th Century at the Vicksburg National Military Park. Also pictured is Richard the Camel, 21. (Courtland Wells | The Vicksburg Post)

Among the more than 100,000 troops who participated in the siege of Vicksburg in 1863, there was but one camel.

The story of Old Douglas, who served as the mascot for the 43rd Mississippi Regiment during the siege, was brought to life Saturday at the Vicksburg National Military Park by Doug Baum of the Texas Camel Corps with help from two camels — Richard, who was portraying Old Douglas, and Jadid.

“There was only one camel here, but when I come to do programs I always bring two camels, because overnight when they stay at a friend’s ranch they like friends,” Baum said.

Old Douglas is remembered with a headstone in the Soldier’s Rest section of Cedar Hill Cemetery.

Baum has been bringing camels to the park for six years to share the story of Old Douglas with participants in the Junior Ranger Program and the public.

Tim Hollingsworth stopped by the demonstration along with his wife Lisa and son Nate as they toured the military park on their way home to Thornton, Col.

“I’ve heard about the mascots, and I’ve heard many dogs and other types of animals, but never camels, not in Vicksburg” Hollingsworth said. ”My wife told me there was a camel buried in one of the cemeteries and I said we have to do see that, we have to go check that out for sure. She’s a science teacher and I’m a social studies teacher.”

Hollingsworth said they were touring the Illinois monument when they saw the camels and the nearby Old Superintendent’s Quarters on Pemberton Drive and had to go learn more about them.

“I think it’s awesome,” Hollingsworth said. “The guy was very knowledgeable and I think it was fantastic to hear the full story of the camel, not just it being here. His life and his death, and how he provided for everything and being a mascot.”

Baum will return — along with the camels — to the military park on July 22 to again give presentations at the Old Superintendent’s Quarters on Pemberton Drive. The presentation is free to attend, but those wanting to attend will have to pay the entrance fee to the park.

Jernigan overcomes plenty on his way to Ph.D.