Church comes together to ‘Rise Against Hunger’ 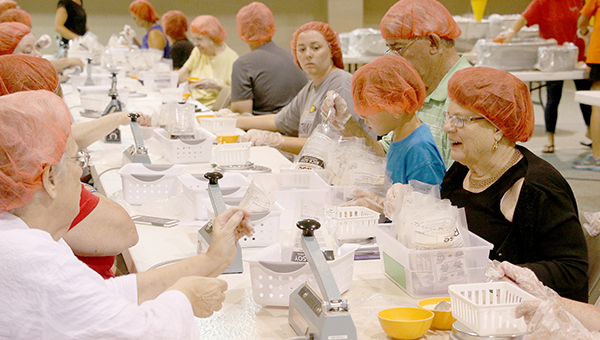 Hooping and hollering could be heard in the fellowship hall of Crawford Street United Methodist Church last week.

Members of the congregation, as well as volunteers from around the community, were packaging nutritious dehydrated meals as part of Rise Against Hunger, and every time a gong was sounded, the group would celebrate.

“We sound the gong every time we finish packaging 1,000 meals,” director of CSUMC playschool and children’s ministries Danielle Warnock said.

The group’s goal was to reach 40,000 meals, which they did during the two packing sessions held throughout the day, Warnock said.

During both packaging sessions, volunteers worked in assembly lines, where they packaged meals comprised of rice, soy, vegetables and vitamins and minerals.

Toni Newman and her daughter, Rachel, were two of the volunteers participating during the afternoon packaging session.

“We travel around to these events when we know they are going on,” Newmann said.

Both mother and daughter live in Vicksburg and have participated in about five Rise Against Hunger events, Newmann said.

Rise Against Hunger is an international hunger relief organization that distributes food and life-changing aid to the world’s most vulnerable.

The volunteer meal-packaging program is designed to give individuals and organizations the opportunity to participate in a hands-on international hunger relief program.

These events also strive to educate and engaged advocates for the world’s hungry.

One in nine people suffer from hunger, and according to the United Nations Food and Agriculture Organization almost all of these people live in developing countries.

Since Rise Against Hunger was founded in 1998, the program has grown and evolved, working not only to help feed those that are hungry, but to also offer training skills and or services that aid in the journey out of poverty.

Rise Against Hunger’s goal is to end hunger by 2030.