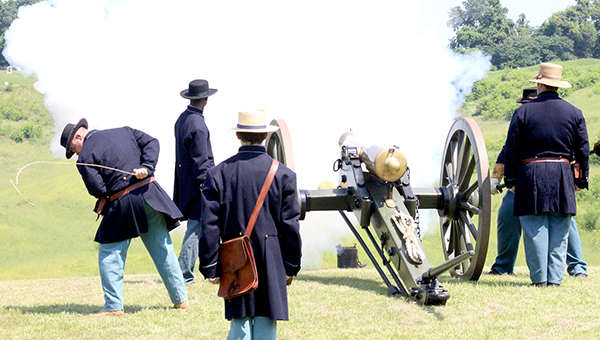 The rumble of cannon fire will sound across the Vicksburg National Military Park this weekend as the park commemorates the surrender of Vicksburg 154 years ago on July 4.

“We will be firing the cannon at Battery DeGolyer at Tour stop 1 in the park to recall the end of hostilities,” said park ranger Ray Hamel. “We will have re-enactors dressed in Union uniforms and we’ll have some people here from the Kennesaw Mountain National Military Park.”

He said a mixed team from both parks will fire the cannon.

“We will also have re-enactors dressed as Confederate soldiers camping at the Louisiana Monument,” Hamel said. “It will be a good spot for visitors to hear the sound of the cannon from across the park.”

President Abraham Lincoln was quoted as saying “Vicksburg is the key! The war can never be brought to a close until that key is in our pocket …We can take all the northern ports of the Confederacy, and they can defy us from Vicksburg.”

The surrender of Vicksburg, coupled with the surrender of Port Hudson in Louisiana several days later, gave the Union control of the Mississippi River.

Luckett: Capitalize on what you’ve got