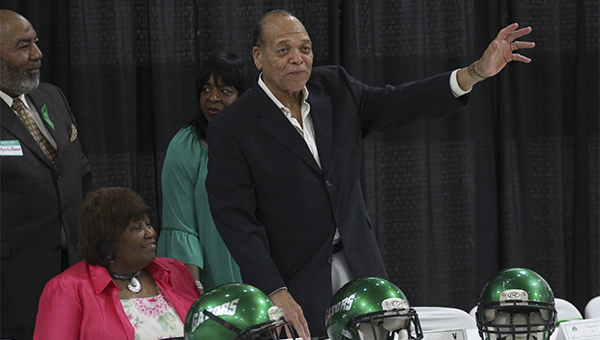 It took only two games before Houston Markham’s tenure as the head coach of Rosa A. Temple High School was in jeopardy.

After getting shutout 6-0 and 12-0 to start his first season as head coach, Markham was given an ultimatum by principal James Stirgus Sr.

“He met me in the hall and he said ‘coach, I thought you could do this job. You told me you could, and you ain’t scored. If you don’t score this week, I’m going to get me somebody else.’” Markham said.

Score they did. Starting the next week in Canton, Markham and the Buccaneers won 40 straight games including two championships and a Red Carpet Bowl title.

Markham, who also led the Vicksburg High School Gators to a championship in 1973, was honored by the Vicksburg community and a number of former players during Houston Markham Jr. Day in Vicksburg Friday.

The festivities began with a parade and included a meet and greet and ceremony at Vicksburg Junior High School, the old Temple High.

“The building, the whole city and this school had such an impact on me that it is like a brand you put on a cow. It is everlasting,” Markham said.

Markham had the difficult task of leading the new football program at the integrated Vicksburg High School starting in 1973. Rickey Mitchell, who was a member of the inaugural Vicksburg High School team, said it was Markham’s leadership and the respect the players had for him that brought them together as a team despite their differences.

“He united this community back in the days when we were coming out of segregation,” Mitchell said. “Everybody thought it was going to be a problem. Black, white, us, them, all that kind of stuff. He didn’t let that happen. He called every player on that team that came to that meeting the first day and said ‘I’m going to see every one of you in my office and individually we’re going to talk.’”

During the meet in greet, members of the 1973 championship showed their coach that they still remembered all the lessons he taught them by running a couple of plays on his behalf.

“He was intense on the sideline,” Mitchell said. “He demanded and got the most out of every player who put their foot on that football field. Whether they’re on the sidelines, getting mop up duty or they start.”

“I felt that this was long overdue,” Alonzo Stephens, who organized the celebration, said. “We are doing a campaign to get him into the Coaches’ Hall of Fame. A man with credentials that he has, it shouldn’t be a problem.”

Authorities step up patrols over holiday